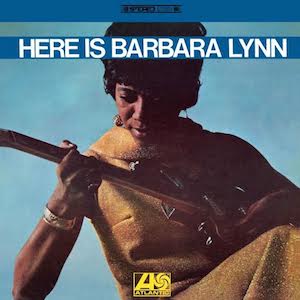 By the time she got around to recording 1968’s Here is Barbara Lynn, set for reissue October 28 by Light in the Attic Records, young Barbara Lynn was already a hitmaker.

Born in Beaumont, Texas in 1942, Lynn was drawn to the guitar, in her case a left-handed model, and she set to learning it, developing a singular style of picking. After learning hits by Elvis Presley, Brenda Lee, and Ray Charles, Lynn set about writing her own songs, and eventually the underage guitarist convinced her parents to let her head to New Orleans, to record in the late Cosimo Matassa’s J&M Studios. With manager Huey P. Meaux in tow and players like Mac “Dr. John” Rebennack on deck, Lynn cut her debut single, “You’ll Lose A Good Thing” in 1962. The song catapulted Lynn into the music business, and its success led tours with the R&B vanguard: Ike and Tina Turner, Marvin Gaye, Dione Warwick, B.B. King, Smokey Robinson, Otis Redding, and soulful stars.

The song is reprised on Here is Barbara Lynn, alongside a selection of flat out stunners: the charging “Take Your Love and Run,” the devoted “Only You Know How to Love Me,” and a pair of tracks, “Sufferin’ City” and “(Until Then) I’ll Suffer,” that focus on painful endurance. The album showcases Lynn’s gorgeous voice, her inspired guitar playing, and powerful songwriting. She spent most of the ‘70s and ‘80s out of the spotlight, but she remerged full force in the late ‘80s, due in no small part to the cult fandom albums like Here is Barbara Lynn engender. Best played at a comfortably loud volume with a strong-to-very-strong drink in hand. words/ j woodbury

Barbara Lynn :: (Until Then) I’ll Suffer

2 thoughts on “Here Is Barbara Lynn”