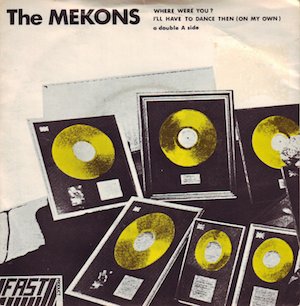 I don’t want to talk about the Mekons. There are plenty of hardcore devotees out there who will be more than eager to tell you everything: how the Mekons are possibly the most prolific college radio act ever, how they started as snotty-nosed art students making meta-critical punk, how they borrowed Gang of Four’s gear to record their first album and inadvertently sounded post-punk, how they then moved into synthy New Wave territory before that was viable, how their mid-Eighties embrace of folk and country (on Fear and Whiskey) is maybe up there with X’s mid-Eighties embrace of folk and country, how they galloped into the Nineties with Pogues-like abandon–and, obviously, how they are still going strong twenty albums into their career. There’s even a Mekons documentary in the offing that can tell you all this. So no, I don’t want to talk about the Mekons.

What I do want to discuss is something no Mekons fan will ever tell you, either because they want to keep it a clubroom secret or else because it doesn’t fit so neatly into the history of the band.   For the fact is this: in between the Mekons’ tongue-in-cheek debut single and their more focused debut album, something strange and unexpected happened. And it lasted for just two minutes and forty five seconds, then it didn’t happen again.

This was the winter of 1978. Punk had hit the barricades and the carnivalesque rambunctiousness of the prior eighteen months had burned itself out. For a whole subset of new bands, the neon and the lipstick traces had given way to black-on-grey, paranoid Eastern Bloc aesthetics. The Sex Pistols were already as dead as Bambi and now Public Image Ltd, The Cure, Gang of Four, Throbbing Gristle, Joy Division, and Cabaret Voltaire were all responding in their own dark and despair-ridden ways. And it was into this icy, underground atmosphere The Mekons submitted their second single, titled ‘Where Were You?’

It’s not what you’d expect. The song sounds, from the offset, like a one-off, like it can’t sustain itself. We begin with a lone guitar figure that could just as easily come from Pete Townsend as Lou Reed: there is the familiar threat of feedback, the ringing chords, the jagged chord-changes. In the distance, a drum roll builds and builds, holding everything in suspense, until it’s almost too much–until the volume of the snare overtakes the guitar completely. Something is charging at us, getting louder–nearer–but we can’t see through the distortion. Is this even a song? What is happening? Finally, there’s a break, like the b’dump-bump of a one-liner, only there’s no punch-line to be had, no release. The guitar just continues jabbing away at the same chords while the bass drum barges in with a new tempo. When a glorious drum-fill finally arrives, we’re a third of the way through what seems like an act of pure energy: no histrionics, no catering to anything but being alive with a heartbeat right now, at this moment. Listen up.

It’s hard to describe what makes ‘Where Were You?’ special because it can’t be pinned down by period context. It isn’t bleak enough to be post-punk. It isn’t quite the angular power pop The Buzzcocks either, or even the proto-New Wave of someone like Elvis Costello. I could keep reaching for names–The Strokes, The Stranglers, The Jam, Jonathan Richman, The Troggs–but you’ll more than likely hear all these elements converging when you listen for them. That’s because what’s happening here is bigger than The Mekons. The resonances before and after are just too great. As with Kingsmen’s version of ‘Louie, Louie’ the song transcends the very band recording it, because it seems to presage a boundless future while at the same time channeling a boundless past. It is, in other words, timeless because it sounds so out-of-time. You don’t listen to ‘Where Were You?’ and hear the spirit of ‘78, or of any fixed point in time; you listen to it and you feel a whole lineage pinning you down in the here and now. This less like an artifact of a bygone era than it is an oracle.

We could go back to ‘Roadrunner,’ or ‘Kick out the Jams, or ‘I Just Can’t Control Myself’ and find some of the same primal urgency. We could go even back to the chorus-less abandon of The Chips’ 1957 recording of ‘Rubber Biscuit’ and locate a similar musical stance, one that isn’t about setting the mood so much as shaking the listener out of it (‘What do you want for nothing? A rubber biscuit?’). This is music that refuses to be background. How could you divert your attention anywhere else while something so effrontery? Here is Pete Townsend, discussing the process:

‘We were leading a revolt against the old values and order of music…Everybody was full of resentment. It was also a means of intimidation: this is all there is. If you are in this room with us, all you get is us. There’s going to be no drinking beer, no chatting up women, no hanging out with your mates.’

When ‘Where Were You?’ kicks off, its two guitars unleash an exuberant back-and-forth that could have been recorded anytime in the past fifty odd years, and yet it also sounds weirdly present-tense. The way ‘You Really Got Me’ can sound present-tense–rigid and nervy and there in the room with you. Likewise the attitude of the song, as proclaimed lyrically, isn’t reducible to any movement or fad (whether that attitude is eager to destroy, make peace and Love, or to shake-shake-shake your booty). What we get instead is that most perennial of themes, the poetic through-line from Goethe to The Violent Femmes: anxious, angst-ridden longing. As pilled-up as the speaker in ‘My Generation’ once sounded, this kid is even more socially awkward, stuttering not on his words but on his own neediness:

These are not things one expects to hear amidst the rubble that punk left in its wake–not until The Smiths came around, anyway. ‘When I was trying to hide in bed/ Where were you?’ Again, the irony with which The Mekons must have gone into the studio to record such lines is transcended by the vitality of the recording itself. They probably thought they were just recording another throwaway, as mock-pathetic as it was pogo-friendly (albeit a song that would remain a staple of the live shows ever since). By the time we hear the words ‘Where Were You?,’ however, we are confronted by more than just a cheeky lyric. The Ghosts of Rock n’ Roll Past, Present, Future are asking that question from within the song too. It therefore becomes interrogative, directed right at us–anyone in the room, bearing witness. Where were you?   words / dk o’hara

The Mekons :: Where Were You?