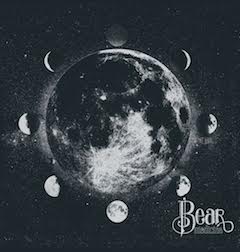 Lexington, KY’s Bear Medicine doesn’t occupy a space–it invents one. Any description of their music using rock crit shorthand–“chamber-prog-folk,” for instance–seems inadequate, even misleading. To put it plainly, Bear Medicine leaves me speechless. Joshua Wright’s songs simultaneously nod to and annihilate time-tested songform traditions, while the band’s spooky energy and skillful arrangements combine to reveal a multiplicity of ideas within each strange, evocative song. Fans of artists as varied as Comus, Led Zeppelin circa III, Kayo Dot, and Townes Van Zandt will be unable to resist the Aquarian Dream Music of this precocious and deeply psychedelic young band.

Bear Medicine’s debut album, The Moon Has Been All My Life, is a concept album that loosely threads together themes of uncertainty: life, loss, doubt, and fear. Using the unlikely combination of cello, flute, piano, acoustic guitar, and skittery percussion, the band creates songs as beautiful as they are odd, as lucid as they are meticulously composed. The Moon Has Been All My Life will be released on vinyl by the band on October 14th and though the album’s myriad charms are best revealed in one uninterrupted sitting, the hastier among you can check out an exclusive premier of the song “All You Celestials” below. words / j jackson toth

Bear Medicine :: All You Celestials

2 thoughts on “Bear Medicine :: The Moon Has Been All My Life”