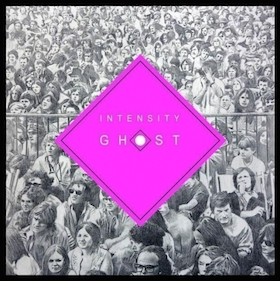 After releasing the masterful Solar Motel last year, guitarist Chris Forsyth put together a group to take the LP to the stage. Pretty quickly, it became clear that the Solar Motel Band was one of the most powerful ensembles out there, finding the fertile middle ground between the razor sharp dynamics of Television with the cosmic leanings of the Dead. Dig the Solar Live Record Store Day release from earlier this year for a demonstration of the group’s potent onstage chemistry.

The new Intensity Ghost is Forsyth and the Solar Motel Band’s studio debut and it crackles with energy. It’s pure, unadulterated guitar heaven — classic rock remade. Unlike the extended song suite of Solar Motel, the album is made up of five distinct songs, each one showing off the virtuosic and versatile skills of Forsyth,  bassist Peter Kerlin, guitarist Paul Sukeena (Spacin’), and drummer Steven Urgo (ex-The War on Drugs),  augmented by the subtle colorings of keyboardist Shawn Hansen.

The interplay between the musicians on Intensity Ghost is intoxicating; check out the 10 minute thrill-ride opener, “The Ballad of Freer Hollow,” as it goes from a Richard-Thompson-jamming-with-The-Who vibe to a gorgeous feedback drone, before snapping back for a thunderous finish. From there, the slide-guitar-fueled, morphine-drip boogie of “Yellow Square” is reminiscent of Exile-era Rolling Stones at their most menacing. The “Marquee Moon”-inspired descending guitar line of “I Ain’t Waiting” shows that Forsyth can do high drama with the best of them. The title track kicks off with a vicious, No Wave-y riff but segues beautifully into a ragged and glorious Crazy Horse lurch. Finally, the elegiac “Paris Song” conjures up the ghost of Lou Reed and Robert Quine’s majestically entangled guitars. Like Uncle Lou always said: “You can’t beat two guitars, bass and drums.” words / t wilcox