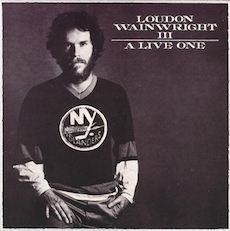 Throughout a career that spans over forty years and travels nearly every road on the musical map, Loudon Wainwright III has always maintained an ultimate honesty in his work. Whether it’s the “New Bob Dylan” sincerity in his 1970 debut record, his aptly placed humor, or his deeply sentimental songs about family, death and loved ones, Loudon has the ability to poetically flip a switch between quick and slow, quiet and loud, happy and sad.

This live ballad, off 1979’s A Live One, delves into the woes and romantic tolls of life on the road, finding the singer in a state of utter desperation, trying to scratch that itch caused by the loneliness of empty motel rooms and beautiful faces with no names. The song was originally released on Loudon’s sophomore record, 1971’s Album II, and serves as a hint to where his songwriting and wonderful autobiographical narratives were soon headed.