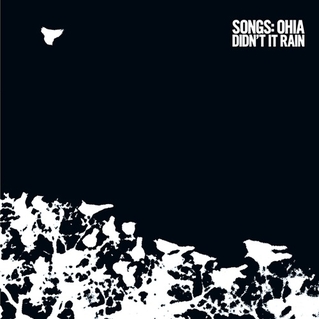 You know, the dark didn’t hide it. But it came damn close. Didn’t It Rain, Jason Molina’s final release under the Songs: Ohia moniker, is seven tracks and forty-five minutes of long, dark blues that nevertheless carry within them a gentle light in the same way that a man carries his own blood; it’s that it’s all protected so well that you have to strike in order to see it.

Given all that came later – the depression, the alcohol, the disappearance, and ultimately Molina’s death last year at the age of 39 – you’d be forgiven for rooting through 2002’s Didn’t It Rain in search of signs. In its sparse, elegiac, and often hushed songs, it can be difficult not to think you feel the ping of a distress cry sent twelve years into the future. Four of those seven tracks have the word “Blue” in the title, after all, including centerpiece “Blue Factory Flame,” whose haunting refrain finds Molina gently mourning his own body, “paralyzed by emptiness.” The album’s skeletal arrangements plot banjos, Jennie Bedford’s soft voice, and Mike Brenner’s lap bass around Molina’s own voice like a circle of cautious friends; even the bright-chorded Telecaster that leads “Ring the Bell” doesn’t seem convinced of its own jangle.

Real truth about it is, there’s a willful, angry hope at the center of Didn’t It Rain. It’s a single little light refusing to be snubbed that Molina fans throughout the record. But his fire doesn’t burn for himself alone. There’s almost always a “you” here, some unnamed person to whom these songs are addressed. It’s the person whose presence his voice seeks as it probes the darkness like a lighthouse beacon through fog in the title track; “try to see the light of goodness burning down the track,” he pleads, even when that light is obscured by rain and wires.

While it was recorded in Philadelphia, Didn’t It Rain was largely written in Molina’s newly adopted hometown of Chicago. He was consciously trying to write in the blues tradition, but the album hardly reflects the swagger and sway of the Chicago masters. Instead, Molina makes his camp any one of the numerous decaying towns that fan out across the midwest. It’s not difficult to imagine that “the bridge out of Hammond” that forms the setting of “Steve Albini’s Blues” leads right into the empty smokestack silhouette of Gary. And from there, just thirty miles south of The Loop, where you can see Chicago’s southern edge wrap itself around the southwestern corner of Lake Michigan, the city looms like a threat: “Blue Chicago moon/Swings like a blade/Above the midwest’s heart,” goes the famous line in “Cross the Road, Molina.”

Like last year’s reissue of Molina’s first post-Songs: Ohia album, Magnolia Electric Co.’s self-titled debut, Didn’t It Rain comes packaged with original demos for most of the album’s tracks, along with a pair of songs he would later re-record. Because the sound of the raw demos so closely mirrors the finished album, they lack the standalone value of their MECo counterparts. But they also demonstrate just how finely Molina tuned his ideas before entering the studio. The vocal melody of the title track’s demo, for instance, lacks the subtle phrasing and rounded-off line endings that give the album version its power, while “Ring the Bell”’s vocal opens on a borderline staccato thump. Didn’t It Rain benefits greatly from the band’s embellishments, subtle though they may be, and from the confidence Molina brought to the studio. Still, it’s an incredible thing to hear all eight minutes of “Blue Chicago Moon” come spilling from a source no greater than that voice and a single guitar.

It’s that song, the album’s last, that brings the full force of Molina’s vision to bear. “If the blues are your hunter/Then you will come face to face/With that darkness and desolation/And the endless depression,” he sings, repeating “endless” over and again, drawing it out over a piano line that seems to plink into nothingness. “Help does not just walk up to you,” he’s sung only a little while before in “Ring the Bell.” “I could’ve told you that/I’m not an idiot.” It’s the record’s sharpest moment, the suggestion of self-pity and unbeckoned assistance forcing Molina into a fully present anger. And he brings it back again in “Blue Chicago Moon,” closing the album on that same idea, but here reversed into its positive: “You are not helpless,” goes the album’s final line. “I’ll help you try to beat it.” words / m garner