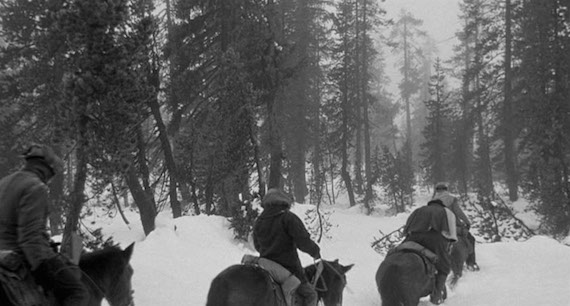 Sometime around college, I heard a quote attributed to Leo Tolstoy that holds “all great literature is one of two stories; a man goes on a journey or a stranger comes to town.” The maxim stuck with me, and is particularly apt when describing  André de Toth’s massively underrated 1959 western film Day of the Outlaw. Starring Robert Ryan and an against-type Burl Ives (he’s the stranger), de Toth’s film ranks as one of the finest psychological westerns ever committed to celluloid.

Our hero is Ryan’s Blaise Starrett, who we find in the film’s opening positively seething with rage towards local rancher Hal Crane, who has erected a barbed wire fence on the open range. Starrett is no white-hatted keeper of ranch virtue, though, as we quickly learn that his real motivations lie with Crane’s wife Helen (a stunning Tina Louise half a decade before the world would know her as Gilligan’s Ginger). “A wire fence is a poor excuse to make a widow out of Crane’s wife,” says Starrett’s drunkard partner Dan in this opening exchange, laying plain the steel-hard tension that dominates the film’s first act.

This opening sequence, and most all of the film’s exteriors, are set against a stark and breathtaking backdrop of crippling snow across a western mountain range. In fact, in a film chock full of ambivalent heroes and villains, the one incontrovertible nemesis in de Toth’s world might well be this relentless winter–one that’s “colder and harder than most,” as one saloon denizen puts it. The hopeless and ominous tone is heightened throughout by Alexander Courage’s booming score, driven as it is by belching lower-register horns and icy woodwinds.

Just as tensions hit a breaking point (with guns drawn, no less) in the old fashioned love triangle of Starrett, Crane, and Helen, de Toth changes course abruptly and introduces the stranger– Burl Ives’ Jack Bruhn, a disgraced army captain with a band of bottom-rung misfits in tow. Braun and his gang are on the run from the Calvary, and he makes it known immediately that his is the law of the land–wherever he is and for however long he chooses to be there. In his best stentorian balladeer bellow, Ives introduces his band of dead-eyed marauders thusly:

“Ace here – he derives pleasure out of hurting people. Tex – rile him and you’re gonna hear some screaming in this town today. Denver – half Cheyenne. He hate white man, but he doesn’t feel half so badly about white women. Boss – bones covered with dirty skin, but even half-drunk he’s the fastest draw in Wyoming territory.” 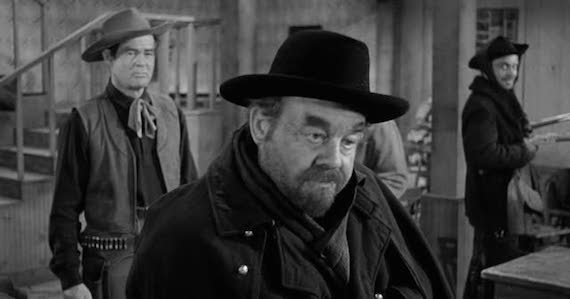 And with this, we spend much of the next hour watching this gang of rabid dogs struggle at their veritable leashes, positively begging to be loosed on the town’s whiskey and women, and kept in check only by Bruhn’s composed but fearsome commands. If only given his permission, we’re reminded by Bruhn, “they could swallow this town whole and no one would be alive to tell the tale.” Meanwhile, Starrett and the rest do their damnedest not to spark the powder keg. We also learn that Bruhn is gut-shot and dying, precipitating the group’s stopover in the town.

Bruhn’s failing health becomes de Toth’s ticking clock. The town veterinarian surmises bleakly of Bruhn that “each cough’s going to rip the lungs a little bit more. A few hours after he starts coughing, he’s going to die.” And so, with each cough, Bruhn’s gang becomes terrifyingly emboldened, culminating in the film’s exasperating centerpiece scene. Granted begrudging permission from Bruhn, the gang convenes a ‘dance’ with the local women, thrashing them about violently to a jaunty and seemingly interminable saloon piano rag. Never has do-si-do looked so much like rape.

Sufficiently rattled by the dance, Starrett devises a plan to get Bruhn and the gang out of town, convincing them he knows a way through the snowy mountain pass that the ever-approaching Calvary could never find. Starrett’s is a dubious and possibly suicidal plan, but it takes, and the stage is set for one of western cinema’s most brutal and beautiful crescendos. The men and their horses trudge endlessly through hip-deep mountain snow, a spectacle captured miraculously by cinematographer Russell Harlan. Perhaps only the great Robert Altman, in the closing moments of McCabe & Mrs. Miller, has ever deployed snow as such a suffocating, carnivorous force.

I won’t divulge the film’s resolution here, but will leave it to say that, with Day of the Outlaw, Andre de Toth created a menacing western of great psychological heft, perhaps rivaled only by Anthony Mann’s hardscrabble mid-50s work with James Stewart. The director is ultimately remembered, if at all, as the man behind early 3-D sensation House of Wax, but it’s Day of the Outlaw that stands firmly as a towering achievement for de Toth and a pillar of this monumental genre. words / s brower

Stream Day Of The Outlaw, in its entirely, below…

Previously: Videodrome: Phantom Of The Paradise