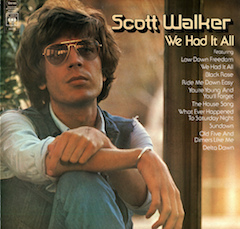 Setting aside his more contemporary avant-garde adventures, We Had It All is a bit of an oddity, even for 60s pop crooner extraordinaire Scott Walker. After releasing some very seminal solo material – four albums in the span of three years during the late 60s – Walker settled into a little bit of mediocrity, a lot of drinking, and then mostly obscurity – recording a series of four albums comprised of no original material.

Enter We Had It All – Walker’s foray into country music, featuring a strange mix of covers, but most notably four songs by Texas legend Billy Joe Shaver. And while he did reunite with The Walker Brothers in the 70s, We Had It All would mark the artist’s last solo album for ten years prior to the release his 80s experimental lp Climate of the Hunter, before progressively pushing the vanguard into the 90s with Tilt and beyond. words / j romo