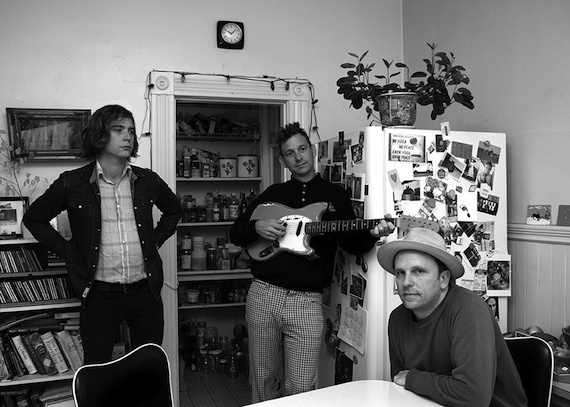 To be fearless in any aspect of one’s life is a feat not easily attained. In the art-world, perhaps the stakes are even higher. As an artist’s credibility and validity are, by nature, prone to scrutiny, often those who make it through the ringer are the ones capable of re-invention and whom resist the urge to be anything other than themselves.

For Bay Area native Sonny Smith, whose rich output across theater, music, and visual is nothing if not proliferate, this dedication to creating honest art is exactly what makes him so alluring. Whether backed with his band the Sunsets or collaborating with various artists, there remains a backbone to his work rooted in letting all your weirdness out, even the darkest parts. Ahead of Talent Night at the Ashram, his latest effort for Polyvinyl Records, we caught up with Sonny to speak out being a dad, transformation, and health food stores.

Aquarium Drunkard: You’ve been doing music, film, theater, etc. for over a decade now. Do you follow any sort of daily rituals/routines to keep the mind active?

Sonny Smith: No, I don’t. I’ve always wished I was one of those writer types that wrote from 7-11 AM every day or something like that. I just do creative stuff in between all the life stuff. I’ve got a notebook with me everywhere I go. I write songs in the car, while I’m at my kids soccer practice.

AD: Are you getting used to the parent/musician balancing act or is there always something new to learn?

Sonny Smith: Well, it’s kind of both. You get a handle on things after a couple of years when you’re  raising  a kid.  Seemed  like when my son turned five, there was kind of this plateau where I could breathe more and have a little more time. The balancing act of being a musician and raising children is crazy. They don’t really fit together. It’s like day to day survival. Every day is like how am I going to record this song AND get my kid from karate? My son is 10 and he’s not missing an eye or any limbs or anything which is good.

AD: Sounds like you’re doing alright. Having spent time in so many different mediums, was there one one in particular that  sparked  your interest in being an artist?

Sonny Smith: When I was younger I kind of wanted to be a writer. I fell for a lot of the bohemian, beat writher aesthetic. I was 17 or 18 and heavy into  Kerouac  and Burroughs and all that. I romanticized being a writer. Music was something I was doing cause it was fun and i was naturally attracted to it. But I didn’t see it in the same light. I didn’t see it it as serious, in the way that being a serious writer held some mystique for me. Slowly, what happened was that I was able to begin to make songs out of some of the stories I was writing.

Not to get too convoluted but if you could picture me as like a double headed person. One guy was the writer and he supplied the themes and words and ideas and the other guy was like well I’ll just put this to music.   It’s like a collaboration within myself. It’s weird but it’s how I’ve done it for a long time. And it always feels fresh because I’m always discovering those roles are there.

AD: You seem to come from a more doing, less thinking mentality. How do get your mind out of the way sometimes to create?

Sonny Smith: There’s a part of me that likes art and music to show warts and all. Once you appreciate that sort of thing, it’s not hard to be prolific. You’re not trying to make a diamond, chiseling   and sculpting it for five years. Just a different type of art form that I don’t love. I, like a lot of my friends, grew up on Velvet Underground and stuff where they just let it all out. All that shit. Being messy. I like that in film and music and writing too.  There’s definitely some songs I wouldn’t mind taking back, but in balance I would rather do it the way I have been rather than a Paul Simon releasing one record every 12 years.

It’s like great, every songs a hit, but it’s been bleached of any rawness. Great songs, but it just seems boring as an artist. What do you do for 10 years? A lot of my heroes are unapologetically creative. I don’t even necessarily sit around and listen to John Coltrane and Woody Guthrie all the time, but just knowing that they went kind of crazy and let all that shit out, like Frank Zappa, three records a year. I don’t listen to it that much, but I find inspiration from them just knowing that they did it.

AD: There’s  a playfulness to your music I really enjoy, even when touching on darker material. Where does that come from?

Sonny Smith: I don’t really think about it. That stuff is a natural tendency. It’s an easy trick and a lot of people do it. To sing about sad or dark subject matter in a major key. I’ve always enjoyed doing it. I  don’t  want to analyze it too much, but it’s something about being able to look into the darkness and write about sad or tragic subjects with some sort of sense of magic and joy. Otherwise, you’re singing things in minor keys about sad shit. It’s pretty miserable to make and to listen to. I like dark subject matter. A lot of the songs I’ve done have been about death and people who  scrutinize  lyrics will be like are you okay Sonny, Are you  depressed? Like no, not at all.

AD: Your characters usually go through some kind of transformation throughout a song. Do you experience this yourself from album to album?

Sonny Smith: Death and transformation are the coolest shit to write about. When you look at life from a mystical point of view, we’re all going through changes all the time.   Unlike someone like David Bowie, I  don’t  change my look from album to album or aesthetic, if anything I’ve always looked the same. Musically and artistically I always feel a little bit of death at the end of one record and a rebirth at the next.

They need to have a dividing line for them to feel like their own things. Sometimes that means changing up the band or instrumentation. Whatever you have to do create that sense of death and rebirth. For me its’ often playing with other musicians or changing genres. All the people I hold in high regard are similar in that way. Finding some way to find newness.

AD: You’re definitely not one to put limits on your sound. Especially with the new album. Is setting limits ever helpful to you?

Sonny Smith: No, I don’t think so. The only limitations I go up against are my own technical abilities. I can only play the guitar so many ways and have very small range vocally. But thats’ part of the challenge. I don’t have any concepts about rules or anything to be more creative. There’s no rules. Who wants to sit around and make rules? That sounds horrible. Sometimes I’ll see those Brian Eno card set of rules and shit and I appreciate them, but in the end they’re just rules. Just like ah get these away from me, I don’t want to see that at all.

AD: Each song on Talent Night was initially intended as a short film. Were the clips completed?

Sonny Smith: I did shoot some things with actors and edited it, but there was a point where it was so obviously morphing into an album that I let the film ideas go. I’ve done this multiple times. I wrote a novel once that turned into the 100 records project and wrote a play that became songs. It happens often and in the reverse too. Songs becoming a comic book or drawing.

At some point the song is becoming it’s own living thing and usually if i succeed, it’s because I’ve stepped aside and let it be what it needs to be. If I don’t, it’s because I impose my will on it. It doesn’t work. I definitely have a lot of songs and scraps of art sitting around that I tried to force them into this thing that they weren’t supposed to be.

AD: How did the song “Happy Carrot Health Food Store” come about?

Sonny Smith: I think natural health food stores are hilarious.I like to stop in them on tour as much as possible because on tour getting healthy food is hard. Out there, in America.   They’re kind of these subversive places where in small the towns the only truly freaky, progressive type people can be themselves.

Sometimes the employees look like wizards.Or a crazy piercing and bellbottoms as big as dresses.I’ll see someone that’s in a denim outfit that’s been sewn together a thousand times.Basically they’re wearing thread. Patches that have been patched to each other. A guy will be dirty and looks like he’s been living in a ditch, but then he’ll have like a a shiny new laptop and its like whoa this is how this guy rolls.

The love affair with health food stores has been happening for a while. I have a friend who owns one in Portland (Cherry Sprout) and I asked him to tell me about his staff. He should get co-writing credits because pretty much everything he told me became lyrics. I just took his words and put them in the song without messing about with them too much. He really wrote it. Classic spot. Michael Hurley plays there all the time.

AD: How do you continue to make music that’s real and honest?

Sonny Smith: Interesting question. I really like music made by people who are okay showing their awkward selves and it comes out lyrically or anyway really. You mentioned people like Daniel Johnston or Michael Hurley…that’s the reason people love them. they can’t even not be honest about who they are and it comes off. We have to weed through all the art out there, not that it’s bad or anything, but it’s just all about being cool and looking good.

We’re   all attracted to that, but how many times do we listen and think, I’m not getting anything from this. That kind of ego stands in the way and blocks people from connecting with each other. When you really are able to let that shit go and let your weird self come out somehow, people feel it. Then you have really risen to the level of a natural food health store employee who is not afraid. words / j silverstein

Related: The Lagniappe Sessions :: Sonny And The Sunsets

2 thoughts on “Sonny & The Sunsets :: The Aquarium Drunkard Interview”