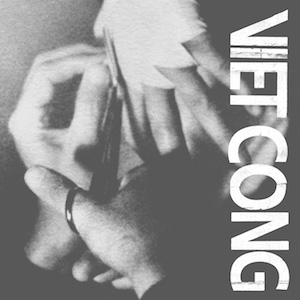 Calgary’s Viet Cong arrived fully formed with last year’s Mexican Summer release, Cassette. But on their self-titled Jagjaguwar debut, it is clear they have grown even tighter and more sure-footed in the short time that has passed. Teasing the new release with “Continental Shelf” and “Silhouettes,” two crystalline cuts of damaged coldwave and an Echo & The Bunnymen breed of post-punk, the tracks only hinted at a record that is relentless in its rhythm, volume and intensity.

The album opens with “Newspaper Spoons,” a brutal kick in the face of propulsive, distorted drums and industrial melody, which unfolds into a beautiful wash of synths. “Pointless Experience” maintains this harsh texture with a driving krautrock groove before sliding into “Bunker Buster” — a Television-esque guitar jam, angular and unbridled. The 11-minute album closer “Death” is a shape-shifting epic and will be one of many reasons that this band will have a frenzied live show this year. But it’s the album’s centerpiece “March of Progress” that is the true highlight. An unflinching drone of pulsating rhythm and faded synths, a kaleidoscopic harmony appears midway through comprised of psych-folk vocals and gorgeously reverberating six-string as they sing, “maybe you just need someone to keep you warm/with fire/coming from a different sun.” It’s a tender and inviting moment on a record that is not full of them. It’s also just enough respite to send you right back into the fierce. words / c depasquale