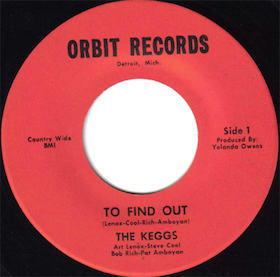 The story of The Keggs plays out like the narrative of a death disc single. A rock n roll band from the suburbs of Detroit, Michigan, in July of 1967 they recorded their one and only 45 single on Orbit Records. Of the seventy-five copies pressed, most were destroyed during the subsequent 1967 race riots – there are currently ten known copies left in existence. Although they gigged around the midwest playing public pools, VFW halls and backyard birthdays, The Keggs failed to garner critical attention or accrue a serious following of any kind. It wasn’t long into their young career, when the lead singer (or guitarist, depending on which legend you believe) was decapitated in a motorcycle accident on his way to rehearsal. His tragic death ended The Keggs forever; the rest of the members disappeared into slow, irretrievable obscurity.

Whether any of the above is true or the product of a gossipy garage-rock game of telephone is beside the point. What is irrefutable is that “To Find Out” – the A-Side to The Kegg’s sole document – is perhaps the purest, most earnest specimen of punk ever put to wax. A wild, raucous, inept and soulful teen-age dirge. The paragon of rock n roll’s unpretentious, animalistic, primitive cave-man id. In it, one can hear the proto-slop of bands to come – from The Ramones to The Modern Lovers to The Black Lips and beyond.

“To Find Out” is perfect imperfection. A song which belongs next to “Louie, Louie,” “Psychotic Reactions” and “Wild Thing” in the perennial canon of primordial fuzz. If it weren’t for Tim Warren and his mandatory “Back From The Grave” compilations, “To Find Out” might have died that night with the Keggs’ lead singer (or guitarist). Thankfully, that wasn’t the case. words / e o’keefe

The Keggs :: To Find Out