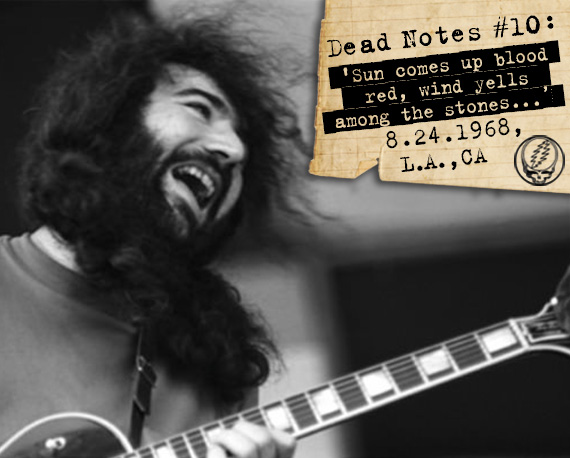 Welcome to Dead Notes #10 where we revisit Two From the Vault, recently released by Light in the Attic Records for the first time on vinyl. 1968 was a deeply exploratory period in the early history of the Grateful Dead (previously reviewed in Dead Notes #2, #5, and #8) where sublime climatic jams are joyously inspired as Garcia’s licks and Pigpen’s swagger launch the group into new watershed moments. They were also performing new material from Anthem of the Sun in a suite — loudly exclaiming they were a solid ensemble that could both swing, yet tip-toe, at the brink of explosion, before instantly dropping back into reality while readying the crowd for the next roller coaster turn. Legendary Dead Archivist Dick Latvala had long called this era ‘primal Dead’ — as the group’s performances were so continuously raw, seething and unabashed. Anthem was finally released on July 18, 1968 and their label Warner Brothers immediately called it a ‘disaster not a triumph’ while NME raved ‘it’s so completely unlike anything you have ever heard before that it’s practically a new concept in music. It’s haunting, it’s pretty, it’s infinite … a complete mindblower’. Yet behind the scenes the band was in complete and utter shambles.

Late summer, August 1968 – we find the band soaring into new planes at Los Angeles’ Shrine Auditorium. Jerry’s flight of brightly colored notes ascends the group into liftoff – mesmerizing the crowd as the ebb and flow of “Dark Star” reaches new heights before exploding into the welcome oasis of “St. Stephen”. Phil sparks an eleven foot dynamite fuse while the drummers slither and tighten their hold as Pigpen and Garcia slowly lead the group into a bluesy crawl for the devastating tale of “Death Don’t Have No Mercy”. The dance of death is short lived as the group spirals into a blistering “Other One”, where Phil’s bouncing rhythm provides the vehicle to a serene near out-of-body experience. Returning to Earth, Garcia begins to finger the meditative opening notes to “New Potato Caboose” while the group chugs along, careening into a fluttering Phil solo that is so blissful it would make Chopin blush. Continuing to build, the jam begins to snap and pop as Garcia shuffles the crew into “Lovelight” as Pigpen rambles centerstage to unleash one of his infamous raps as the evening comes to a close. Capping the evening, the band return to the stage to deliver a somber rendition of Bonnie Dobson’s post-apocalyptic folk song “(Walk Me Out in the) Morning Dew”. Just as Garcia’s solo reaches prodigious heights the plug is pulled – ‘they turned us off once again … goodnight everybody’.

However, this is a point in the band’s history where it gets both murky and very interesting. Early in 1968, Phil and Jerry discussed with the band’s manager, Rock Scully, about firing Bobby and Pigpen as they thought the two were not advancing musically as fast as the others in the group. Days after this gig the band gets together to review the recordings for a potential future release. Scully throws the first punch saying ‘the situation as it exists right now, musically, depends on four guys’, while Garcia twists the knife adding ‘all you gotta do is listen to the tapes…’ and Lesh delivers the final blow ‘so after this weekend, we decided that’s the end of that. No more’. Bobby and Pigpen are rendered speechless, but as the band folklore goes they were indeed ‘fired’ but continued to play gigs. The two began to constantly woodshed their skills on guitar and organ, respectfully, while the remaining members took to creating splinter groups like Mickey and the Hartbeats which invited other local guitarists and keyboardists to the fold. Less than a year later Phil lamented the situation with Rolling Stone’s Michael Lydon saying ‘(The Dead) have passed the point where breaking up exists as a possible solution to any problem. The Dead, we all know, is bigger than all of us’. But to listen back on this mind blowing recording, it’s wild to think the original Grateful Dead, as we’ve known it, could of ended right then and there while leaving hell of a recorded legacy within a few short years. words / d norsen