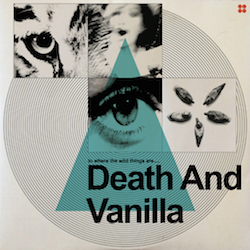 Traversing the same retro-futurist dreamscapes that the late, lamented Broadcast first explored, Swedish trio Death And Vanilla dig into some lovely sounds on their sophomore effort, To Where The Wild Things Are. Thanks to the group’s arsenal of vintage microphones and equipment — Moogs and mellotrons abound — aficionados will have a field day playing spot-the-influence as the album’s 10 tracks unfold. Silver Apples, the United States of America and the BBC’s Radiophonic Workshop are perhaps the most obvious touchstones.

Of course, having a cool record collection doesn’t necessarily make you a cool band, but Wild Things hangs together wonderfully, regardless of its sources, as  Marleen Nilsson’s breathy vocals float over the dreamy, haunting sonics. An album well worth getting lost in. words / t wilcox