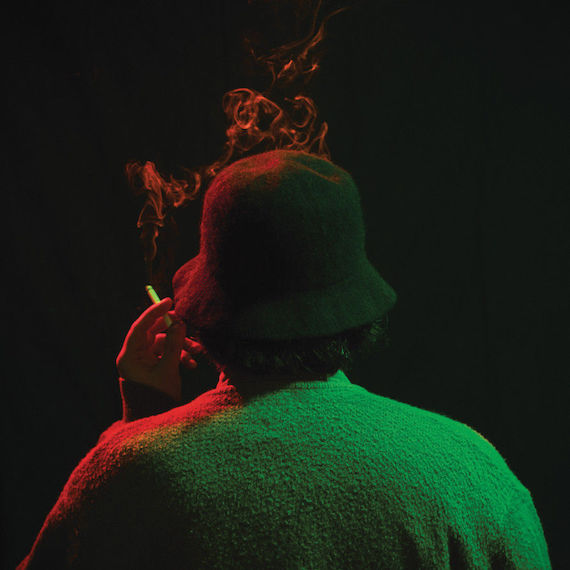 Chances are Jim O’Rourke’s name is somewhere in your record collection. As a musician and producer, he’s worked with some of the most important artists and bands of the last three decades: Sonic Youth, Wilco, Bill Callahan, Stereolab, Joanna Newsom, John Fahey, Beth Orton, and dozens more. As a solo artist he’s stayed busy too, balancing varied experimental efforts with knotty singer/songwriter LPs like his 2001 classic Insignificance, utilizing elements of progressive rock, jazz, Americana, and pop to convey his witty, hangdog observations and wisecracks.

In many ways O’Rourke’s new album Simple Songs picks up where 2009’s 38-minute instrumental album The Visitor left off. The new record twists and turns like that one, but here O’Rourke breaks the elements down into shorter song forms, and once again he’s at the microphone, singing over piano pop, orchestral folk, and strutting rock (dig the Steely Dan vibes of “Half Life Crisis”). Recorded at Steamroom Tokyo, O’Rourke’s studio in Tokyo, Japan, where he’s lived since 2005, Simple Songs is an immensely satisfying record, and like O’Rourke’s best, it rewards and unfolds more each listen. Aquarium Drunkard called O’Rourke to discuss the record’s long gestation, O’Rourke’s high school influences, and riff on the “dishonesty of earnest men.”

Aquarium Drunkard: You worked on this record for five years?

Jim O’Rourke: Actually, it was about six years.

AD: How did you spend those six years?

Jim O’Rourke: Well, how it happened was…on the old records I was playing with Glenn Kotche and Darin Gray and [they] were they only people on the planet I could do those records with. It had to be them. When Glenn became “The Glenn Kotche,” deservedly so I mean, it became more and more difficult to get together and work on things. I didn’t want to do that stuff with anyone else, so I didn’t. [Laughs] Until I met [Yamamoto] Tatsuhisa, who plays drums on this record, about six or seven years ago by accident. We just happened to be on the same bill, and it was like a time machine going back to when I first saw Glenn play on stage with Edith Frost. It wasn’t like I all of the sudden said, “Oh, I want to make another band record.” It was that all of the sudden the possibility of doing that was open again. Then I called Sudo [Toshiaki] who plays bass on the record, who’s been a friend of mine for 20 years — he was the original drummer in Melt-Banana. So, I just tried to see what it would be to actually play with drums and bass again, doing my own things. Then when we brought in [pianist] Eiko Ishibashi, who makes her own records for Drag City.

The first two years…I was almost like a drill sergeant. Not like a drill sergeant; it wasn’t like Full Metal Jacket or anything, but I had to get them to play with the particular nuance and the sense of rhythm that I specifically want. It really was a period of getting them to play like…it sounds awful to say, “To play like I had three clones,” because obviously I can’t play drums like him, and I definitely can’t play piano like Eiko, but they had to understand the particular rhythmic feel that’s very specific to me. We took the time to get it to that point. There are versions of this record from the first two years. It’s shocking how different they are, just rhythmically and the feel and everything. The timing, the pacing, the shading — it’s so shockingly different. We just needed that time, and I’d never had that time before with a band.

AD: What was the general reception to your method? Was it a comfortable fit to start?

Jim O’Rourke: They had to get used to how picky I am. It’s not like I’m picky like that movie Whiplash. It’s called Session here in Japan, that movie about the drummer. I haven’t seen it, but I’ve seen a trailer, so I know what it is, and we weren’t doing that. I can be insanely particular, but then ambiguous on purpose. I think they weren’t used to someone being that particular but they didn’t have a problem with it. They’re still around six years later, so they must be okay with it.

AD: The drums are really great on this record.

Jim O’Rourke: Really? Oh, okay. I’m happy. I haven’t listened to it since I finished it. I just have this image of being unhappy with it in the end.

AD: Is that normally the case for you?

Jim O’Rourke: Oh, sure. And that’s fine. I mean I can’t imagine what sort of weird hell people who are satisfied with their own work [experience]. That’s a special kind of hell I can’t imagine. What kind of life is that? [Laughs]

AD: You call this record Simple Songs, and obviously there is a lot of complexity in the playing and arrangements, but somehow that title doesn’t feel entirely cheeky.

Jim O’Rourke: Yeah. Well, of course there’s the obvious gag, which I like. It made me laugh. The name of the record has been around for years, but it’s not completely cheeky, no.

AD: There are some big melodies, some big hooks. It seems like that’s part of your DNA, a rock & roll sensibility. Can you speak to that at all?

Jim O’Rourke: You know, it’s funny. Of course when I was a kid that was the predominate form of popular music. You had 10cc and things like that, but the big bands when I was growing up were The Who, Zeppelin, and especially in Chicago, Rush. It was the landscape I was sort of born into. The sort of side door that opened [for me] when I was 10 or so were the first Talking Heads and Television records. Things like that were connected to rock music but it was like a side door that showed that it could have other nuances. When I was really young, I remember my sister, who’s older than me, her boyfriend, all he listened to was Jeff Beck and Led Zeppelin, and because he was my sister’s boyfriend, I wouldn’t listen to them. [Laughs] I didn’t get into Zeppelin, strangely, until the end of high school/beginning of college. All he ever played was their first and second record, and then I heard Houses of the Holy and Presence, and that blew my mind [realizing] that kind of music could have so much incredible nuance. When I was a kid I played in the jazz big band, and we would play at the basketball games. I was doing arrangements of “YYZ” and other Rush tunes, or King Crimson or something like that, for the big band to play at basketball games.

So I mean, it was part of my [upbringing], but for me it’s always been about an understanding of the weight of sound. That’s what rock & roll is to me. It sounds silly, but when I was in college my number one favorite rock & roll record was [Philip Glass’] Einstein on the Beach. I’m not kidding — turn that thing up loud, and I’m talking about the original recording, with actual Farfisa organs and everything — and that’s fucking rock & roll to me. It was the same sort of thing when I first heard Phill Niblock, hearing the real thing, live as opposed to on record. It was the same sort of connection to me.

I remember the first person I met in my generation who understood where I was coming from was Alan Licht, when we met when we were fairly young. He was already on that wavelength himself. It isn’t “rock” in term of a social stance or social movement; I like being able to feel the sound, to have it there in the room.

AD: I feel like I a lot of folks are reading the first line of the record, in “Friends With Benefits,” “Nice to see you once again/been a long time my friends/since you crossed my mind at all,” as sort of a dig or sarcastic line.

AD: Yes! Well, I read it that way, and read other people taking it the same way, but it is a narcissistic read, sure.

AD: There’s a certain humor and slyness to your work that’s very appreciated.

AD: I think that the prevailing lyrical mode at that time was an especially earnest one. I suppose it still is.

AD: That’s a great quote [laughs]. Is that one of your own?

Jim O’Rourke: Yeah, I just made it up. It’s true, though.

AD: That’s such a funny line in that song. You had to know we’d zoom in on it.

AD: Were those lyrics written early on?

Jim O’Rourke: No, no, but the sentiment was there early on. There are a lot of references between [this record] and Insignificance, very specific lyrical references. Musically too, but specifically lyrical. That’s sort of the first sort of hint at that.

AD: I think my favorite lines are in “These Hands”: “Our hands are not our friends/they’re leading lives of their own.”

Jim O’Rourke: That’s actually the oldest song; that’s why there’s no band on it. It sat for about six years.

AD: The lyrics seem to address a feeling of disconnection, sort of looking at how natural processes happen without our permission.

Jim O’Rourke: Yeah, there’s definitely that element to it. For me, it sort of works on a few levels, but that’s definitely part of it.

AD: Do you feel comfortable talking about the other levels?

Jim O’Rourke: The thing I always say is if I could explain things in prose, I’d be a writer or a novelist or something. Even writing lyrics takes me a long, long time. Actually, writing words out is my least favorite thing to do. I don’t even like writing emails, so it’s hard for me. But there’s definitely that, and there’s also… there’s a certain way of looking at life that Irish people have that I can’t avoid. My parents weren’t American. They were from Ireland. So, I was raised in an Irish household. As a tree, you can grow as far into the sky, as far from the ground as you want, but the roots are still stuck in the ground.

AD: Is that song a connection to those roots?