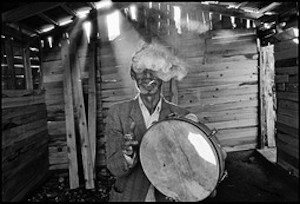 I don’t know about you, but some of the most moving and mindblowing music I heard last year was Lament For Epirus, a collection of late 1920s recordings by the Greek violinist Alexis Zoumbas. Beautifully remastered from ancient 78s by collector Christopher King, Zoumbas’ deeply emotional playing sent me down the rabbit hole in search of more traditional Greek sounds — Rebetika, Marika Papagika  — as well as recent, Greek-inspired albums by Rhyton and Xylouris White.

Writer Amanda Petrusich (author of the 2014’s highly recommended Do Not Sell At Any Price) was also captivated by Zoumbas’ music, and last summer traveled with King to the violinist’s homeland in northwestern Greece, a trip that resulted in her fantastic  New York Times travelogue “Hunting for the Source of the World’s Most Beguiling Folk Music.” While Petrusich was taking notes, King and his partner Jim Potts were recording — and now we can hear what they heard, via two recently released discs on JSP Records. They’re both wonderful, suggesting that the Epirotic tradition that Zoumbas drew from all those decades ago is thriving.

What is this music? It certainly conjures up another, long-past time — but still, it’s almost frighteningly alive. Human. The groups presented here consist of clarinet, violin, the eight-stringed laouto (similar to an oud) and a percussive tambourine-like instrument called the defi. There’s a definite structure to the playing, but there’s also plenty of room for improvisation; there are times it makes me think of the adventurous stylings of Eric Dolphy. Other listeners might hear the distant echo of Sandy Bull‘s eccentric explorations. The players occasionally get pretty “out,” while remaining deeply rooted in Epirus’ pastoral landscape. As with Zoumbas, there’s an heavy sense of sadness and longing in every note. It’s a transformative, healing kind of melancholy, however — above all, this is ultimately joyous, life-affirming music. Take a listen. words / t wilcox

One thought on “Going Greek :: Field Recordings from Epirus, 2014”