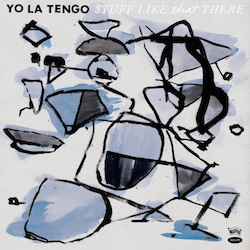 Fans of Yo La Tengo’s softer side received some very good news this week with the announcement of the band’s latest LP,  Stuff Like That There, out  August 28th. It’s being pitched as a “spiritual sequel” to YLT’s beloved, semi-acoustic 1990 album, Fakebook, which masterfully mixed covers, re-worked originals and new songs. Judging from the two songs that have surfaced so far, the band has ably located the Fakebook magic a quarter century later.

The secret ingredient just might be guitarist Dave Schramm, who has been re-enlisted into YLT’s ranks for the first time since Fakebook (though he appeared live with them occasionally). Schramm’s gorgeous, glistening tone is all over the mellow remake of the previously stormy “Deeper Into Movies,” which originally appeared on 1997’s I Can Hear The Heart Beating As One. Simply beautiful. words / t wilcox