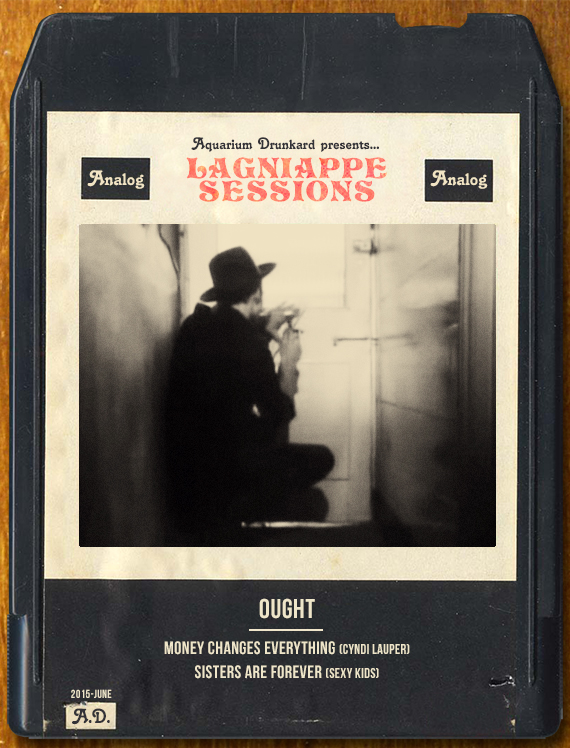 A year ago next month, I happened upon Ought’s live show while in New York. Their performance that evening stands as one of the more memorable examples of going in to see a band cold and leaving a proselytizing fan. Shades of Talking Heads, Television, the Fall and the Feelies swirled around the room that night, though never approaching gross pastiche.

This week’s installment catches us with the Montreal group as they reinvent ’80s Cyndi Lauper and pay tribute to the defunct Sexy Kids. Ought, in their own words, below.

I was in an American High School the first time I heard She’s So Unusual. I had laughed, at first, at the cover art and then turned to a friend for social approval.   Stone-faced, he returned my gaze: “this is a seriously amazing record.”   She’s So Unusual might be my favourite pop record, and “Money Changes Everything,” being the lead-off, might be the first song in which I’d ever heard a synth (and what  a synth-line…), as well as my personal favourite to dance to. As a vocalist, I find Cyndi’s voice absolutely gut-wrenching. Also, Cyndi once saved my life: I was driving back to Montreal from the USA in the terrifying carcass of my old Honda Minivan (that Tim K and I did our first tours in). I felt myself dozing at the wheel, hitting the rumble strips as soporific Québécois folk tunes played on the radio until I remembered… a Cyndi mixtape! The first lines of “Money Changes” came on and gave me enough juice to cruise on home.

Ought :: Money Changes Everything (Cyndi Lauper)

“Sisters Are Forever” is a rare uniting force amongst the four of us; a track that can get us all out of the dumps pretty fast. I’m not even sure how we came across it–it’s a hard-to-find 2008 7″ on Slumberland, and the band seems to have disappeared from the internet. None of us have ever heard any other songs by them, as far as I know, anyway. I think some of them are in that band Veronica Falls now, which I’ve never heard, either. So it’s just this song, really, with no context, and us flailing like idiots while we pack our stuff after shows when Amy, our sound tech, plays it over the PA. For our version we thought it fitting to sap all the fun out of it.

Ought :: Sisters Are Forever (Sexy Kids)