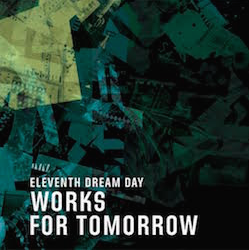 Not many bands stick it out for three decades — and even those who do usually end up as shadows of their former selves. Not so with Eleventh Dream Day. The action-packed  Works For Tomorrow isn’t just one of the veteran Chicago group’s best efforts, it’s also one of the best guitar records in recent memory, as Rick Rizzo and James Elkington find the sweet spot between Television’s precise/pristine interplay and Crazy Horse’s wild abandon.

Dig the opener, “Vanishing Point,” with drummer/vocalist Janet Beveridge Bean and bassist Doug McCombs laying down a propulsive, krautrockin’ rhythm as Rizzo coughs up a cluster of righteous fuzz that’d make Neil Young himself stop in his tracks. Or the bracing, Mission of Burma-esque “The People’s History,” a tightly wound number that stutters and spits before launching into a glorious, feedback-laced anti-solo. In short, Works For Tomorrow is the work of a band still inspired by its own powerful noise — a Dream come true, really. words / t wilcox