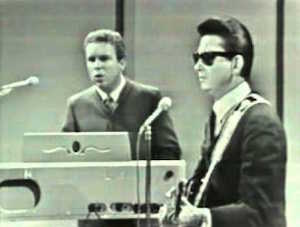 Rough around the edges with driving drums, catchy guitar melodies, and even catchier harmonies and leads, the sound of Bill Dees’ “Tennessee Owns My Soul” is not unlike Black Lips pre-Good Bad Not Evil material. Dees strong vocal lead with the two-part harmony brings X’s John Doe and Exene to mind, only supplying the harmony on this tune is none other than Roy Orbison.

Which raises the question: who was Bill Dees? The man is virtually unsearchable online, with a scant Wikipedia page and not a single solo 45 or LP to his name, save a self-released CD in 2002. However, between 1964-1972 there were 67 songs cut with the Orbison/Dees credit. Famously, Dees co-wrote “Oh, Pretty Woman” and “It’s Over”. After hitting #1 in 22 countries around the globe with the former, Dees quit his job at the warehouse and hit the road with Orbison. He was the 20-something on the bus playing poker with the guys by day, rocking electric piano and singing harmonies by night.

Apparently, many record opportunities came Dees way during his tenure with Orbison, though they were viewed as direct competition and Dees “didn’t want to rock the boat”, so he passed again and again. However, Orbison did produce many sessions with Bill Dees in the lead that tragically never saw the light of day. This alternate version of “Tennessee Owns My Soul” must be from one of those sessions. There’s no paper trail online except the Orbison version that appeared as the b-side to the single “Penny Arcade”. The Bill Dees version of “Tennessee…” is the far superior and evidence that there was a raw energy there that was left in the dust; replaced with nicely produced strings sections and the finest of session musicians. While it is wonderful that we have all of the legendary collaborations between Dees and Orbison, it’s a damn shame we will never hear the ripping, low budget 1969 Bill Dees solo album that this song could have front run. words / p frobos