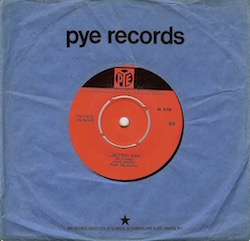 During a period when the Kinks commercial stock was at a particular low ebb, both Ray and Dave Davies were experiencing songwriting and performing peaks that, while appreciated early on by a core group of kult fans, saw greater acknowledgment with time influencing several generations of artists and writers.

While Dave’s “Death Of A Clown” is featured prominently on The Kinks 1967 masterpiece Something Else By The Kinks, the track was originally released as a Dave Davies solo single just a few months prior. The song became a big hit in the UK and Europe, which led to a series of other ‘solo’ singles from Dave; all of which feature The Kinks. Perhaps the Kinkiest of all – “Creeping Jean” – was buried on the b-side of Dave’s final solo release of the ’60s, the relatively lightweight “Hold My Hand” (itself a commercial failure). “Creeping Jean” prominently features Dave’s slashing guitar, matched with a very punk vocal, hypnotic bass guitar swoops, and a seethingly hooky chorus.

Dave continued contributing occasional tracks to Kinks albums throughout the 70s (see the amazing “Strangers” on 1970’s Lola Vs The Powerman And The Money Go Round lp) but didn’t release another solo release until 1980. His 1960’s singles and outtakes have been compiled a few times as a ‘lost’ album, but nothing matches the power of this, the original mono single. words / d see