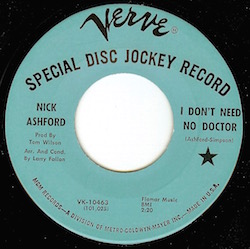 A soul classic, the most famous recording of “I Don’t Need No Doctor” was cut by Ray Charles, and later, by many a rock & roller (Humble Pie and Chocolate Watchband being two notable examples). The track was penned by the NYC based songwriting team of Nick Ashford, Valerie Simpson and Jo Armstead  (one native New Yorker – Simpson – and two southerners), who also wrote “Let’s Go Get Stoned” — itself famously cut by Ray Charles in 1966.

It’s worth noting that while Valerie Simpson’s birth date is reported to be either 1946 or 1948, she was (impressively) still a teenager while crafting these amazing songs. Eventually, Jo Armstead ended up writing and producing more incredible soul sides in Chicago, while Ashford and Simpson found fame a few years later in the 70s as a smooth soul duo.

While Nick Ashford didn’t have the gift of Brother Ray’s smooth upper register, his ardent reading of “Doctor” is a real kick, driven by a forceful drummer (listen to that powerful snare work), excellent female backing vocals, and an intense energy. words / d see