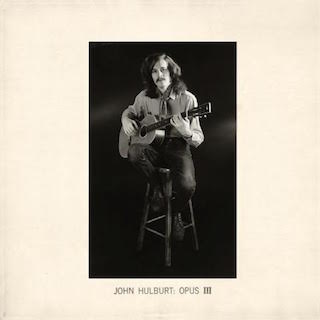 When John Hulburt’s private press release Opus III came out in 1972, his hometown Chicago was awash in the sounds of Curtis Mayfield and Alligator Records. Isolated from the solo acoustic scenes happening in Berkeley, New York City, and elsewhere, Hulburt’s self-released LP was an oddity in a city tailing off a solid ‘60s rock scene with the Cryan’ Shames, Shadows of Knight, and Hulbert’s group The Knaves. Self-released and obscure almost instantly, Opus III has been rescued from the bins by Tompkins Square and Chicago guitarist Ryley Walker, who chanced upon the album and fell hard for it. (Walker’s own music is a pastoral Bert Jansch-Van Morrison hybrid that’s both as unfashionable and excellent in 2015 Chicago as Hulbert’s was in 1972, so it makes sense he’d swoon for a fellow anachronism.)

John Hulburt :: The Freak On The Black Harley

It’s easy to compare Hulburt to John Fahey, but impossible not to–Hulburt himself credited the enigmatic guitarist as his muse and inspiration for this set. Tunes like “Sunrise” and “Hallelujah I’m on Parole Again” are spiritual cousins to Fahey’s “Sunflower River Blues and “Poor Boy a Long Way from Home”. But as you can hear Furry Lewis and Reverend Gary Davis in Fahey, you can hear South Side Chicago blues seeping into Hulburt’s playing. The album kicks off with “Inside and Otherwise”, an updated version of the Knaves’ floor stomper “Inside Outside” that distills the booming pulse of the original into moonshine. “Freak on the Black Harley” features some cool classical/flamenco flourishes, providing a glimpse at Hulburt’s range. The album does have its dopey dated moments–you can feel the ponytail forming on your head during guitar-flute workout “Freak on the Black Harley (Revisited)”, and the lyrical content of “Guitar on My Knee” reminded me immediately of Navin Johnson singing “I’m Picking Out a Thermos for You” in The Jerk. But overall, the performance is boss and the collection’s a treat.

The Opus III package contains good liner notes by Walker, Hulburt’s sister, and former Knaves bandmate Gene Lubin. Much as the Knaves channeled bands like the Animals, Yardbirds, and Pretty Things, into a few slabs of garage perfection, Hulburt’s version of Fahey-derived picking seems plucked from a Nuggets box of lost acoustic gems of the ‘60s and ‘70s. It’s a welcome reminder that the crate digging never ends, nor should it. words / k titterton