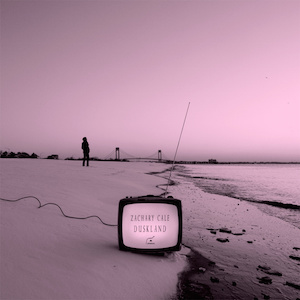 Due to the prominence of acoustic guitar, Zachary Cale’s records have regularly been slotted into the folky category. And while the categorization is not entirely off the mark (the dude can fingerpick with the best of them), it’s only part of the story the Brooklyn-based songwriter is telling. Cale’s work has always been cannily crafted in the studio, as he finds interesting and alluring ways to present his songs.

His latest LP, the stellar Duskland, sees Cale indulging a bit more in widescreen production techniques, expanding the scope of the sonic landscape a bit, calling to mind the atmospheric textures Daniel Lanois brought to Dylan in the late 80s on tunes like “Series of Dreams” and “Most of the Time.” And yet Cale doesn’t lose the intimacy and warmth that made his previous records such a pleasure. An impressive feat.

Of course, impressive production techniques won’t save bad tunes. No worries — there’s not a clunker to be found on the album, from the pensive, reverb-drenched opener “Sundowner” to the spacey and gorgeous “Evensong,” which beats Kurt Vile at his own game. We’ve certainly dug Cale’s stuff in the past, but Duskland might just be his best effort yet. words / t wilcox

One thought on “Zachary Cale :: Duskland”