Was there ever any doubt they’d be back? That’s the only question to consider when listening to Roadside Graves’ Acne/Ears — their first long-player in four years. 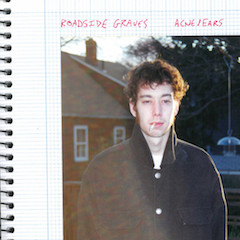 As aspirations go, every band would love for music-making to be a full-time endeavor. But as realities set in, most bands live parallel lives: There’s the music, life as a band, the thing that for listeners might as well exist independently of anything real. And then there’s everything else. Jobs and relationships and the trying… the trying to settle into the lives that the rest of us do. Eventually, something is compromised and one of those lives wins out. Most usually, it’s the latter. For the Graves, moving past 15 years as a band — not middle-aged by any means, but no longer young — there are jobs and families and all the rest. They’re teachers. They’re married. They’re dispersed across states and countries. If that’s face value — and taking things a that — then the answer to that question could be… sure, there was some doubt. That would be the incorrect answer.

That’s important for two reasons. More generally, this is a band with consistently great work that just isn’t going away, the kind of band whose output will surely be discovered and rediscovered for years. More specifically, Acne/Ears is evidence of the fight that’s kept them going. Not the fight for success or to “make it” as a full-time band. But the fight against the self — against doubt, growing through and beyond experiences, the occasions where those parallels synapse with conflict.

In speaking to “Gospel Radio,” a standout that cooks the Roadside Graves sound with a light synth baste and adjusted heat (which you’ll hear, at turns, throughout the record, beautifully highlighted by “Surfin’,” as well), singer John Gleason says “the song and the new record are more honest and autobiographical” than their previous work. That could be a throwaway cliche if it weren’t so damned true.

Certainly storytellers in the classic sense, this is the first time the Roadside Graves have tried to tell any part of their own. Acne/Ears is almost like a diary, written from adolescence through early adulthood, set to music. Intimate to the point of vulnerable, self-effacing to the brink of despondence, that there’s triumph at all is remarkable.

The titular “Acne/Ears” threads that tenuous emotional spiral bare. In it, a kid feels so isolated that he’d rather be isolated at home than suffer the more severe aloneness of being at school among peers — they full of piss and vinegar, he of puss and blood. The song quietly moves across downbeat strings and resigned percussion. But just when it starts to feel desperate, the song lifts a giant middle finger to the angst, puts some duct tape on the kid’s mic — which might as well stand in for his constitution — and rocks.

Fast forward a few years to “Donna (Reno),” to a band on the road, where victory for that kid isn’t as easy as blowing the walls off his basement. Lives, current and potential, are placed in conflict — stay on the road, persisting as a functional alcoholic who needs a drink to get on stage, at the cost of marriage and kids and solid intentions. Or move in with a cousin in Jersey, at the cost of possibly everything. At more than eight minutes, the song simultaneously feels like the road and the thoughts you have when staring at it as it blurs by.

In theme, these two songs bookend an Acne/Ears experience that runs the course from divorce to death — his father’s, his own. There are thoughts on faith, questioning yours or maybe seeing everyone else passively walking through theirs; the powerful feeling of the wrong people who are exactly the right friends (“Contact High Alumni”); doubts about ability — to sing, to amount to anything by the time we’re ash.

Known for anthemic moments and cascading folk/rock interpretations, Roadside Graves’ more subtle, contemplative turns have often been their least discussed, though among their very best. Acne/Ears probably relies on those more here than at any point in the past — and in great service to articulating feeling. But the band also knows when not to confuse introspective content as quiet emotions. To wit, “Gospel Radio” gets bolder musically — kinetic drums and synth — just as the subject matter gets heaviest, and even a more withdrawn “Endangered” remains this side of uptempo when it could’ve instead been, frankly, depressing.

Navigating life, talking through it, admitting some of our more vulnerable or embarrassing ideas about it — we don’t really consider this stuff superficial. Usually, we count that as the digging in, pulling back the curtain, as it were. But maybe that’s not enough. Because maybe these themes are universal enough that merely talking about them barely scratches at their surface. I had initially thought that “ears” in acne/ears were meant to suggest these Alfred E. Neuman badges of awkwardness, like acne. But maybe instead they’re the contrast to acne, to the superficial in both countenance and conversation. Close your eyes and don’t just talk about your experiences, but listen to what they have to tell you. Otherwise you’ll never learn a damn thing about yourself. The Roadside Graves have clearly listened. And that’s precisely why there should never be any doubt. words / j crosby

One thought on “Roadside Graves :: Acne/Ears”