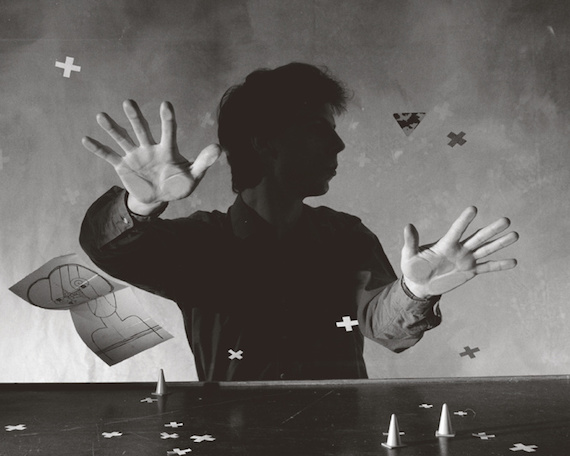 In the Pacific Northwest of the late ‘70s, electronic composer K. Leimer dedicated himself to enveloping, minimal soundscapes, but in the early ‘80s, he launched Savant, an ambitious studio project involving a large cast of players – including Marc Barreca, Op Magazine publisher John Foster, and members of Seattle power pop band the New Flamingos – to explore a new jittery, stitched-together sound featuring elements of post-punk, industrial, progressive rock, and funk. “Some guys I knew, some I didn’t know. [They] seemed to be willing to give some time to it and work in a non-traditional way,” Leimer says, reflecting on the release of Artificial Dance, a newly released collection of music drawing from Savant’s 1983 album The Neo Realist (At Rest), 12” singles, and unreleased tracks.

The compilation is his second archival release for RVNG Intl., following the sublime ambient collection A Period Review: Original Recordings: 1975 — 1983. Leimer has continued making music, running the Palace of Lights imprint, and developing new approaches to art and sound. He discussed the Savant era with Aquarium Drunkard via phone from Hawaii, where he now resides.

Aquarium Drunkard: What inspired you to start working in this unique fashion, bringing in musicians to play and editing those performances together into new things?

K. Leimer: In a way, it was a lot easier. There’s something about sitting in a studio at that time with a click track and a couple of instruments and working your way through things…it can be very tedious and frustrating. The stuff I did for [RVNG Intl. collection] A Period of Review when I was first starting obviously wasn’t interested in rock or any kind of beat [driven] stuff really, but that’s also kind of fun. It’s such a saturated presence in culture, then and now, that it seemed like it would be interesting to take the ideas that I had been exploring on my own and apply them to a different set of circumstances.

AD: Were you editing live performances, things played in a full band setting?

KL: No, actually it was very much like what I do, and many other people do today, which is to build up sound libraries of various snippets and sources and begin to assemble the pieces. Of course, it was much less fluid [than now] because we’re talking about little chunks of tape, so I might have a percussionist in and give him a click track and say, “Why don’t you play a few different patterns?” or there was a fellow, Bob Rogen, who had a lot of little hand percussion and he would come in and record. You could have done it with an E-MU, tried to sample these things and replay them on a keyboard, but instead of doing that I had a variety of musicians pick the kind of instruments they wanted — sometimes I asked a bass player to play guitar or a bass player to play percussion — [and they’d record] very small chunks of audio. I would cut out the pieces I liked and loop them, repeat them, process and layer them, and build them up into what you hear on the record.

AD: There are more ambient pieces included here, but also some dancey textures. Were you listening to funk or club music at the time?

KL: Not really. My listening’s always been kind of peculiar and split. When I was really young there were three records I came across and really loved: von Karajan doing Mozart’s “Requiem,” the Incredible String Band’s Changing Horses, and King Crimson’s In the Court of the Crimson King. Those are all very different [laughs]. I think at that time, some of the records that always stand out in my mind would be the Henry Cow works, Legend and Unrest in particular, [David Byrne and Brian Eno’s] My Life in the Bush of Ghosts, [Bryne’s] The Catherine Wheel, the This Heat records. A lot of German stuff, not the space stuff, but the sort of harder-edged disarming things like Neu! and Can. That kind of stuff seemed more appealing to me because it had a sensibility that was a little more amusical. Faust in particular — they were always making it very obvious that these were recordings and happening in a studio. There wasn’t necessarily this tradition of musicianship or performance. Those things I just found very refreshing. I didn’t know how many more love songs I could listen to even by the time I was 20 and take them seriously. [Laughs] There was a vacuousness or emptiness to it, to my ear anyway, and a predictability. I guess we could go for hours on all the disappointing aspects of how commercialized and corporatized all of this stuff becomes. Even today I’m stunned by some artists who you would think about be outside of that but seemed obsessed with wealth and property. I came very much out of the Jerry Rubin/Abbie Hoffman thing and my sentiments in art were shaped by Dadaists and Surrealists and people like Duchamp. So, there wasn’t much of an admiration for whatever seemed familiar or bourgeois, for lack of a better word.

AD: You write about seeking out and looking for flaws in the recordings. What lead you to employ that method?

KL: I just always found that a bit more interesting…One of the things that’s bothered me about popular music and music in general, especially music with beats, is that in the end it’s very reassuring. “Here comes the snare, and there’s the snare again.” I start to get – I don’t think bored is the right word – [but the] salve of predictability has begun to trouble me more and more as time’s gone on. Musicians like [drummer Bill] Bruford have been able to attack this in a number of ways, how he moves the snare around, but for someone unskilled, unable to do what he does, there’s this other lovely area full of mistakes and errors. The whole process is basically accidental anyway, so you leave them there. Not to belabor Eno, but I did, especially for A Period of Review, use the Oblique Strategies, and I think one of the cards that I pulled all the time was “honor thy errors – hidden intention” or something like that. That seemed reasonable. There’s an enormous struggle to get around that stuff and this illusion of perfection.

I don’t find any of those pursuits to be worthwhile or true. So, the mistakes were emblematic of the skill level, intention, and the process, and that’s part of what gives it a bit of distinction. I studied design and fine art, and had the same sort of interest there. There’s going to be an accident, and the accident isn’t really anything wrong, it’s just something outside or your expectation. So what’s easier: to force this object to try and behave the way you preconceived it or to simply accept it as part of what you’re doing? I’ve always preferred the latter to the former. words / j woodbury