(The return of Videodrome. A monthly column plumbing the depths of vintage underground cinema – from cult, exploitation, trash and grindhouse to sci-fi, horror, noir and beyond.) 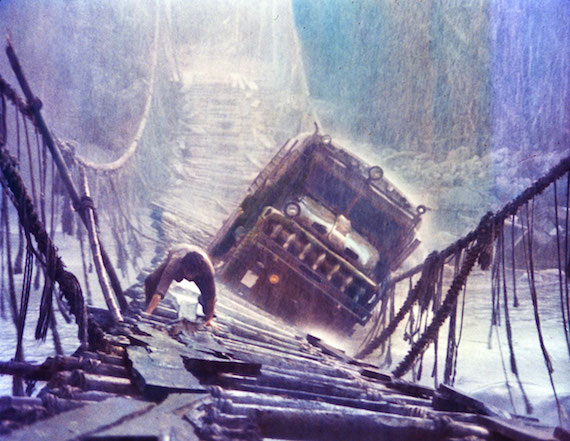 Watching Sorcerer, William Friedkin’s once forgotten 1977 psycho-jungle thriller, it’s tempting to suspect that at any moment the film could take a sharp turn toward supernatural horror. Everything feels ripe for the kind of evil mysticism and lo-fi gore that only the gonzo terror flicks of the late 70s seemed capable of producing.

All the familiar elements are in play. A black magic title promising wizardry. Dream-like sequences that make you question what’s real and what’s imagined. Visuals of animist deities carved into ancient stone. Factor in the primeval setting and ghostly score–synthesized by Krautrock kings Tangerine Dream–and the result is a suffocating creepiness.

Then there’s the director, Friedkin, helming his long-awaited follow up to two consecutive genre triumphs (The French Connection and The Exorcist), going toe to toe with Star Wars for summer’s biggest blockbuster. Just a few years removed from peak demonry in The Excorcist, which sent a generation of witless bystanders home with night terrors, he was in just the right place to serve up a crowd-pleasing creature feature.

But he didn’t. The beautiful thing about Sorcerer is that the expected turn toward the paranormal never happens. It doesn’t need to. Because the film is really about the opposite. It’s about life and reality, and the inherent cruelty therein.

If that sounds dark, it is. But that shouldn’t dissuade you from two hours of immersion in this remastered HD jewel released in 2014. Sorcerer is a cynical allegory on the unpredictability of real life, and a testament to detail-oriented movie making. Friedkin himself has called it his favorite film and the one closest in execution to his original vision.

Based on the 1950 French novel Le Salaire de la Peur (AKA The Wages of Fear), and the 1953 celebrated Henri-Georges Clouzot film of the same name, Sorcerer follows four strangers from the far corners of the earth to a squalid South American pueblo called Porvenir (the word for future en Espaî±ol). Brought together in a drawing of fate reminiscent of ensemble classics such as House on Haunted Hill and Enter the Dragon, this unsavory quartet–an American stickup artist, French banking fraudster, terrorist Palestinian, and Mexican assassin–is given a lucrative offer to drive two truckloads of volatile nitroglycerin across 200 miles of dense tropical forest.

Taking the job is an act of desperation. Surrounded by poverty and filth, the protagonists work for a greedy American oil company pilfering the local economy, propping up a crooked generalissimo and keeping its colonial boot firmly on the neck of the village populace. With each of the characters longing to escape this banana republic backwater, a stack of pesos offered in exchange for a suicide mission sounds like a bargain.

But the dire symbolism of their quest is clear. No matter how skilled or careful their navigation across these desolate lands, the threat of sudden explosion shadows them like an Andean condor. Having been introduced in a series of vignettes to jumpstart the film, each of the men is running from a sordid past back home, and with every passing mile of green hell we feel the constriction of impending judgment.

What gives Sorcerer a cult status is not so much its offbeat and unpopular subject matter, though that plays a part–examples include morally repellent heroes and gratuitous Latin American exploitation. Rather, it’s the film’s utter failure and dismissal upon initial release and subsequent rebirth in underground circles in recent years. Critically it was panned as a cinematic overreach by a hubristic director riding too high on fame and fortune. Commercially it was crushed by Luke Skywalker and Han Solo.

The criticisms are not without merit. Dialogue is so sparse as to be almost unimportant, mere backdrop to the visual feast of exotic locations and Friedkin’s legendary camerawork, which includes shaky cam decades ahead of its time. More damningly, the characters come off wooden at times, positioned more as grimacing pawns in a convoluted play on the cruelty of fate. 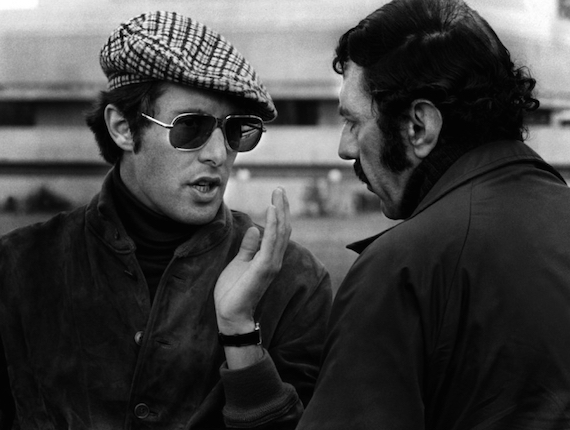 But none of the shortcomings owe to lack of effort. It wasn’t a mismanaged production or Hollywood pissing match that undercut Sorcerer’s success. On the contrary, the entire project was an OCD freak show of craftsmanship. The movie’s most eye-popping scene–a bridge crossing during a monsoon–reportedly took three months of work and cost over $1 million (that’s $4 million in 2015 money). The result is a stunning display of visceral realism that today’s CGI-fueled adventures rarely capture.

Speaking of modern day, it’s difficult to watch Sorcerer now and avoid thinking about how much movies have changed over the past few decades. Maybe it’s the subtle emphasis on small details, like the din of a crowded Jerusalem street in one of the film’s early scenes. Or the willingness to stray from screenwriting dogma, as evidenced by writer Walon Green’s opening series of mismatched vignettes that appear to have nothing to do with one another. Or perhaps it’s the fact that, up until the past 15 years or so, technology was not sufficiently advanced to solve every shooting dilemma with the “miracle” of digital effects, pushing filmmakers to gargantuan feats of ingenuity in their use of locations, props and set design.

This film sits at the intersection between the grit of Hollywood new wave, nearing its late 70s zenith, and the slickness of the oncoming blockbuster era popularized by such titans as Steven Spielberg and Ridley Scott. It possesses strong characteristics of both movements. And maybe for that reason, its brilliance was underappreciated.

But viewed through a modern lens, at a time when television gets all the attention and movie buffs are increasingly faced with big budget fatigue, Sorcerer has a special appeal and sense of authenticity. It’s an unsettling film with obvious artistic ambitions, executed to varying degrees of success. But it offers more than enough high wire action and face-melting spectacle to keep your attention from globe-trotting start to suspenseful finish. Though it never got the love it arguably deserved, Sorcerer is the work of an obsessed master at the prime of his talents. words / j campbell