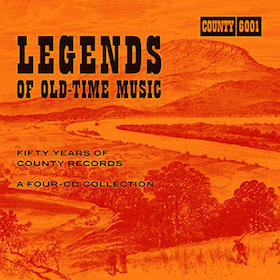 Amid a now decades-long glut of roots music reissues, reappraisals, and deep cuts, one would think the keg would eventually kick. But that sure as shit isn’t the case with Legends of Old-Time Music: Fifty Years of County Records–there’s so much going on in this 4-CD box set that it’s difficult to know where to begin. Co-produced by Grammy-winning music historian Christopher King, an impossible amount of research went into this collection, both in the music and the meticulous liner notes which pair extensive biographical info with each tune’s cultural origin. The 113 tracks contained here represent the life’s work of County Records proprietor Dave Freeman, a New Yorker who founded the label in 1968 after embarking on an Alan Lomax-style home recording tour of North Carolina and Virginia. The label continued releasing this stuff across four decades, and never lost the homegrown weirdness that allowed these sounds to ferment.

Kinney Rorrer writes in the liners, “They had learned to play in a time when each valley had its own style that reflected the relative isolation of the people. With no radio, no television and few if any records, these musicians honed their own style at social events celebrating the lives of the local population.” With that in mind, it’s cool to hear the regional quirks that permeate various attempts at “Arkansas Traveler”, “John Henry”, “June Apple”, “Sail Away Ladies”, and others, even as time diminished the relative isolation of these places. Also impressive is the sheer array of pickers, fiddlers, stompers, and hollerers included, both known and obscure (for me, anyway): famed luminaries like the Carters, John Ashby, Clark Kessingerk and Tommy Jarrell fit seamlessly alongside the widely-unknown Eldridge Montgomery, Sidna and Fulton Myers, and Clyde Davenport.

Bottom line, this set’s a treat: a worthy offspring of the Anthology of American Folk Music and a valuable document of an ongoing cultural wrinkle that refuses to be ironed out. words / k titterton

Tommy Jarrell :: As Time Draws Near

One thought on “Legends of Old-Time Music: Fifty Years of County Records”