Another October, another opportunity to discuss horror films in detail and be taken semi-seriously. Halloween is a time to feel comfortable speaking in public about otherwise obscure subgenres, such as evil Christmas and campfire slaughter. Above all, it’s the best time of year for exploring the world of B-movie creativity, as so many strange and wonderful masterpiece portraits were painted when budgets were tight and competition for dime store cinema attention was fierce and nasty. This Halloween as you’re winding down the hours of the wolf, dim the lights and tear into some of these devilish delights.

Mario Bava’s chaotic festival of body dismemberment could be said to have launched Italian splatter horror to new heights (or contemptible lows, depending on your perspective). Genre masters such as Dario Argento and Lucio Fulci were forced to up their game from standard Giallo suspense to darker, bloodier and more disturbing forays after witnessing this chop shop. Released in America variously as Bay of Blood, Carnage and–most illustratively–Twitch of the Death Nerve, the plot is utterly preposterous and difficult to follow, but it has something to do with a bunch of opportunistic murderers killing each other over the rights to inherit a large bayside estate. It’s clear that Bava placed all his energy on shoring up the details in each of multiple graphic killings at the expense of screenwriting. Despite its exploitative and vicious nature, there is a certain artistry about this film, manifested in the range of camera angles, colorful set design and visual detail.

Speaking of Italian nutballs making mayhem on movie screens, one would be hard pressed to find a more colorful collection of spectacular horror effects and otherworldly demonic extremes then what is stuffed into these three loosely-related supernatural freak shows from Godfather of Gore Lucio Fulci. Only considered a trilogy because all three pictures revolve around the inadvertent opening of a portal into hell, the litany of evil that forces its way into our world here encompasses zombies, arachnids, cannibals, maggots, mutants, possessed priests, backwoods lynch mobs, witches, devils, and a veritable smorgasbord of walking, spattered flesh slop. In other words, these are absolute must-see cinematic operations. The number and sheer diversity of creative killings is a wonder of the horror movie world. Fulci with his mixed background in art history and medicine hews close to the typical Italian mold, wielding technocratic expertise and genius onscreen inventiveness, even as the plot and acting in many of his films has ceased to matter. Pick any one of these three, or watch ‘em all in succession. Just don’t eat too much candy beforehand. 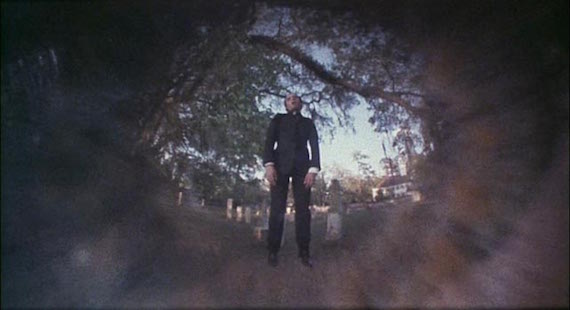 This is a despicable film, in a very good way. Despite possessing all of the elements necessary to be considered an exploitation flick, including grindhouse guru Roger Corman producing, it still manages to outdo itself, pushing the boundaries of what might have been considered acceptable camp horror at the time. The plot is a mix of derivative sci-fi cliché and incomprehensible mythological drivel, where a crew of space travelers fly to the far side of the galaxy in search of another crew of space travelers who have gone missing. Then slimy, grotesque alien monsters, demonic worms and dinosaurian evil of all stripes begin to terrify, butcher and even rape this ill-prepared intergalactic rescue party. Likely intending to capitalize on the popularity of space killing started by Ridley Scott’s Alien, Galaxy of Terror deserves points for fantastic low budget effects and the appearance of Robert Englund of Freddy Krueger fame. It also launched the career of an unknown production designer named James Cameron. Great, gory stuff.

Allegedly one of George Romero’s favorite films to make–odd seeing as how it’s not a zombie movie–Martin is an unconventional vampire film. Following Romero’s rubric of skewering societal norms behind slapstick gore, the story of pale, sickly blood-sucking Martin is perhaps an allegory on homosexuality or the state of being a social outcast. Lacking the super powers of traditional Gothic vampires, the titular character is both a misanthropic monster and a victim of his condition, which forces him to stalk his victims and inject them with sedatives before feasting on their veins. The syringe-happy hunting scenes and ensuing ambush kills are reminiscent of TV’s Dexter, as is the antisocial nature of the hero-villain. The end result is an original and at times thought-provoking spin on the typical undead formula and keeps in form with Romero’s 1970s golden age during which he wrote, directed, edited and produced nearly everything he touched.

Despite having its reputation sullied by the subpar 2005 remake, Assault on Precinct 13 remains an underground classic and one of cinema’s most chilling portrayals of the breakdown of law and order. An early showcase of the versatile filmmaking abilities of John Carpenter, the story follows its title to a tee. A gang of ruthless criminals lays siege to an urban police precinct, methodically surrounding it before quietly killing off everyone inside, one by one. Carpenter is a master of the high concept thriller. His entire filmography is rooted in dark, speculative adventures that begin with the question “what if?” Aided by the creep-tastic synthesized music scored by Carpenter himself, Precinct 13 matches brooding suspense with senseless acts of brutality that at once shock and disturb the viewer. Though not a horror film in the typical sense, this is a dark and scary picture.

Roman Polanski’s story of a nervous apartment dweller and his gradual psychological breakdown, ostensibly at the hands of the building itself, is one of many “the house is evil” ghost stories that dominated the horror genre in the late 70s. But few of them–The Amityville Horror, The Sentinel–come close to matching the sense of impending doom and paranoia that permeates this psycho brood fest. Add to that the skilled touch of a genius moviemaker in his prime and The Tenant emerges as a near masterpiece of dark, Hitchcockian suspense with a dash of Euro-weirdness. Polanski himself plays the lead, a regular guy who rents a Parisian flat where the previous tenant went suicidal, and before long he’s following in her depressed, hallucinating, self-loathing footsteps. Top notch work from one of the all-time greats, The Tenant holds up today and still creeps you to the core.

It’s amazing that Tobe Hooper was able to reign himself in once and create a polished, well-paced and skillfully directed horror classic called Poltergeist. It probably helped to have Steven Spielberg write and produce, but nonetheless that one remains a pearl of the genre. Otherwise this man is a freak, and the rest of his directorial collection is almost uniformly terrible. Composed of exhibitions of wanton cruelty and violence, most of his films are rooted in an inane plot concept, including winning ideas such as a killer laundry machine and a murderous red dress. But no one makes exploitative horror more fun than Hooper, as evidenced by his debut The Texas Chainsaw Massacre and eagerly-awaited yet horrendous follow up Eaten Alive. The first line of the movie is “my name’s Buck and I’m here to fuck”–later ripped by Quentin Tarantino in Kill Bill–and silliness follows accordingly. Here is the gist: mad racist redneck hotelier delights in terrorizing his clientele by feeding them to the gigantic plastic alligator that lives in the swamp outside. Why people would continue to check in at such an establishment when every hotel guest that comes on screen buys the farm is the wrong question to be asking. But they do, and thank god for that. It gives us the chance to witness the artistic manifestation of a disturbed young mind (Hooper), obviously enabled by too much Hollywood establishment praise. The moments of unintentional comedy are many, and the sheer goofiness and constant fog make this a memorable drive-in style jaunt. The alligator is so pathetic it makes you wonder if this entire project was an elaborate performance joke. Big fun.

A camp caretaker starts offing frisky adolescents to exact vengeance for the cruel acts that long ago left him burned and disfigured. The plot of The Burning is so similar to that of Friday the 13th it begs the question of why and how it was ever green lighted in the first place. But pound for pound this one might be a superior film to the first chapter in Jason Voorhees’ multi-generational saga. For one thing, it had some really nice fundamentals going for it. This was the first official film from Miramax, the super successful production outfit started by Bob and Harvey Weinstein, who were heavily involved in writing and producing on the project. Second, the cast is not half bad and features early roles by Jason Alexander (yes, that Jason Alexander) and Holly Hunter. But most importantly to horror fans, special effects on The Burning were handled by the legendary Tom Savini, and his unmistakable gifts are evident throughout. The villain Cropsy–named after a common New York urban legend at the time–cuts a terrifying image of a mutant madman and his kill scenes, often conducted with a trimming shears, offer tremendous, flesh-reaving gore. Overshadowed by more popular slasher films of the time, The Burning never received much attention. But it’s a surprisingly effective campfire massacre yarn that holds up well compared with the rest of the bloated slate of early 80s killer-on-the-loose flicks.

What’s a horror movie listicle without Vincent Price? Madhouse serves as a bit of an homage to its star, as the plot revolves around an aging horror movie icon (played by aging horror movie icon Price), who gets thrown in an insane asylum after witnessing (or committing?) the murder of his fiancé. Upon his return from the nuthouse he’s given one more chance to play the role of infamous Dr. Death, but when bodies start turning up in ways that mimic kill scenes from his most popular movies, he’s not sure of what’s real and what’s nightmare. This is vintage British mystery-terror, with good scripting and predictably strong if unspectacular performances from Price and rival goth-legend Peter Cushing. Madhouse was one of the last horror movies made by Amicus Films, known for decades as a top notch horror production company that reliably pumped out monster movies and not-so-subtle terror yarns that were just mainstream enough to stay off of England’s notorious “video nasty” censorship list. Offers enough suspense, cheap thrills and cheesy costumes to keep you on your witching hour toes.

Billed with the slug “the darkness is forever,” Possession is a bizarre and mysterious examination of the slow disintegration of a marriage that pivots midway through and starts a descent into supernatural evil. It’s also the rare horror film that received artistic acclaim from Western intelligentsia, as lead Isabelle Adjani won a Best Actress at Cannes Film Festival. Made in the mold of avant-garde films reminiscent of more recent works by Gaspar Noe and Lars Von Trier, the chaotic story follows the marital infidelities of a spy and his wife, the collateral damage on their young son, and the metastasizing effects of their strange, unstable behaviors on a cast of surrounding players. Directed by Polish provocateur Andrzej ZuÅ‚awski and shot in early 80s Berlin, the film has a distinctly dark Cold War vibe underlying its mystic elements and scenes of hysterical violence. With excellent visual effects, strong lead performances and gritty camera work, this is a deeply disturbing but enjoyable journey into madness. As a bonus, it features the incubation of a chained, humanoid demon beast. words / j campbell