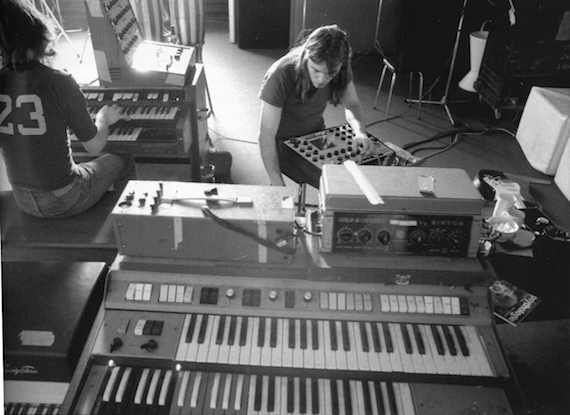 Forget for a moment, if you will, Pink Floyd’s tendency towards the cosmic. By this I mean the epic flights into overdrive and sci-fi ambience we know so well. Despite the much-remarked-upon Barrett whimsy, it was this (anti-)gravitational pull that got them from “Astronomy Domine” to “Set the Controls for the Heart of the Sun”, from “Echoes” to “The Great Gig in the Sky”. But hear me out: leave to one side the old prisms, bricks, and inflatable pigs and delve into a wrongly overlooked chapter in the band’s career.

Really, Pink Floyd’s soundtracks are supposed to be the dogs of their discography, two star albums sandwiched between far better-known, four- and five-star classics. But to disregard these soundtracks is, I think, not only to judge them against the Grand Floyd Narrative (honestly, most albums look disproportionately sketchy when set beside cultural behemoth that is Dark Side), it’s also to obscure their finer details. 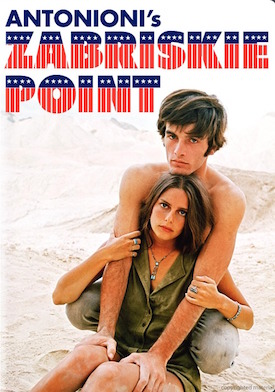 In fact, up until maybe Dark Side, Pink Floyd were laying down tracks for celluloid almost as determinedly as they were for outer space. One of the band’s earliest breaks, of course, came with a sublime onscreen performance in the classic time-capsule Tonite Let’s All Make Love in London (1967). There followed music composed for a Kafka-esque short film called The Committee (1968) and three songs used in Antonioni’s Zabriskie Point (1968), where the likes of “Careful with that Axe, Eugene” can be found alongside Jerry Garcia and John Fahey (and during the sessions for which Richard Wright submitted an early version of “Us and Them”). Indeed a quick glance at the band’s IMDb entry shows just how congenial their floaty-rocking-fluidity was to a whole range of B- and Z-grade movies throughout the Seventies, appearing illicitly in everything from Kung Fu fare to Sharon in the Rough (1972) and Dominatrix Without Mercy (1976).

However, if we discount the revamped songs used for the film Pink Floyd–The Wall (1982) and the music the band later composed for the racing film La Carrera Panamericana (1992), neither of which ever saw release as an album, Pink Floyd produced just two full-fledged soundtracks in their time together. (Let’s also leave to one side, please, Dark Side’s supposed debt to The Wizard of Oz. Both of the Floyd OSTs were for films directed by Barbet Schroeder–More (1969) and Le Vallée (1972)–and both are much better than you think they are.

Schroeder’s first outing as a director, More tells the tale of a folie au deux between a German drifter and an American expat as they follow a heroin-fuelled downward spiral in Ibiza. It’s a lot more remarkable than it sounds, particularly in the contrasting visuals of dead-end, post-‘68 Europe and sun-baked Mediterranean. Standing out too is the Sphinx-like intensity of Mimsy Farmer whose character introduces hard drugs into the fuck-the-world paradise the couple attempt to carve out for themselves. Indeed, Farmer is key to the interplay between the music and the visuals, here, as she struggles to keep the pain of her past addiction and self-destructiveness right below the surface until the third act. This volatility is not discernible in the matter-of-fact dialogue but rather in wordless glances and the way Farmer moves around her naî¯ve, petty-criminal lover (directly after sleeping together in her Paris apartment, she says to him, “I’m going to Ibiza–I go tomorrow–Want to come with me?”). And the music Pink Floyd provides for the film captures perfectly this duality between beauty/liberation on the one hand and pain/addiction on the other. The shadowy, Can-like propulsion of the “Main Theme” knows what is coming and it knows it ain’t gonna be peace and love. 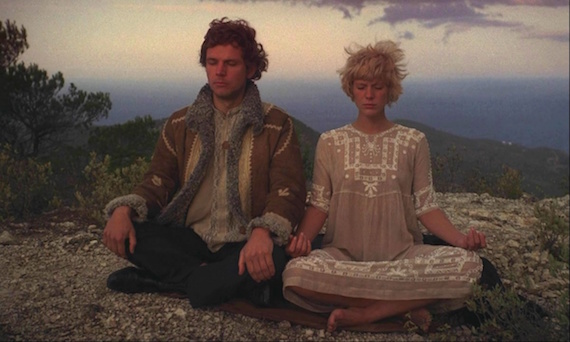 It is worth noting, in this respect, that Music from the Film More was the first album to be undertaken by the band minus Syd Barrett. These were musicians who needed no reminding of the ways in which the Sixties zeitgeist of tuning in and dropping out could have its casualties too. Perhaps unsurprisingly, the album sounds like their darkest turn up to that point. Hints of anarchy are everywhere, everything bordering on violence (fitting for a film that also involves a Nazi Doctor in hiding), whether it’s the Eurotrash flamenco of “A Spanish Piece” or the building dread and nightmare birdsong of “Cirrus Minor”. The murderous attack of “The Nile Song” seems likewise to be forever falling down a black hole, endlessly dropping away from itself.   “Up the Khyber” meanwhile is a maddening Krautrock swirl devoid of any Carry On… jollity. Taken as a whole, the More OST makes for a surprisingly hard, angry, and unnerving little album–but rather like a drugged up love affair in Ibiza, it’s not without its moments of bliss and aching beauty, either. Chief among these reprieves is “Green is the Colour,” one of the more delicate and folky songs Pink Floyd ever recorded. Indeed it’s a credit to the music’s vulnerability that, even as an acid-dropping Mimsy Farmer dances to the tune onscreen, you recognize that this moment can’t last: the sun is going down and the waves are getting choppy.

Pink Floyd :: Green is the Colour

The three subsequent albums Floyd then produced in quick succession, just a year apart from one another, were more conceptual, more controlled, more identifiably Floyd-like in their expansive space-rock sound. But if the weird grab-bag of tunes on the first side of Meddle (1972) hint at anything at all it’s the soundtrack the band were about to compose for the next Schroeder outing, La Vallée. The recording went quick. Whereas Dark Side (which the band had already started) would ultimately take six months to complete, the sessions for the soundtrack took place over just two week-long breaks to that haunted sanctuary for Rock n’ Roll tax avoiders, Chî¢teau d’Hérouville.

The OST was released as Obscured by Clouds, which is an alternate English title for the film–and this is just one of many ways that the soundtrack is everything that the movie isn’t, or fails to be. Schroeder’s second film is, weirdly, a reversal of the downward spiral traced (and more effectively so) by More. This time we begin with a French art-dealer and diplomat’s wife determined to get her hands on some rare feathers in the New Guinea jungle. At an outpost, she accidently stabs a Francophone hippie in the foot with a spear, they sleep together, she follows the hippie and his friends into the highlands to find her damned feathers, they free their minds, they orgy, they go native, they reach the paradisal valley of the title…Basically, a bougy, post-colonial wet dream. The less said about it, in fact, the better. But suffice it to say that one of the most gorgeously unfolding melodies Gilmour and Waters ever composed together is, here, used to underscore one of the most lifeless sex scenes in arthouse cinema. 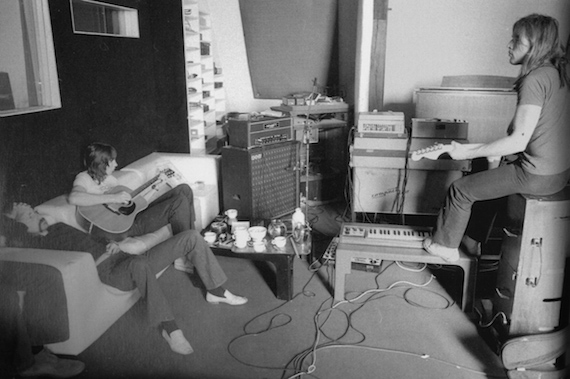 What is more, “Wot’s…Uh the Deal?” could stand as a reaction to the placement (or lack thereof) of Pink Floyd’s music throughout the film. Where the soundtrack had been essential to the texture of More, here Schroeder’s verité style gets stupidly literalist: meaning, you only hear Pink Floyd when the radio is on inside the jeep. (The cues the band arranged seem to have been ignored too as “Mudmen” isn’t anywhere near the scene with the Mudmen, and I doubt “Childhood’s End” was composed to highlight the nuances of a ten second sequence in which our feather-hungry Art Dealer gets sulky about having to use la toilet in the middle of the jungle). What is there on record, as opposed to on-screen, however, is full of depth and surprises.

What is possibly Water’s first foray into his big Rock-Stardom-as-Neurosis theme, “Free Four” is a great example of that dark-light interplay the band do so well. Rhythmically swinging like a barroom sing-a-long, the song also features a synth part not a stone’s throw from the Satanic. The lyrics too, despite the folksiness of the performance would cast a little more shade in the darkest crannies of The Wall: “You are the angel of death/And I am the dead man’s son.” It’s a brilliantly bitter and desperate little number, opening up a furrow that Waters, if not Pink Floyd, would increasingly trudge through the Seventies.

The album opens with a theme of sorts in the title track, a pulsing touch of menace nowhere else registered in the film. “The Gold It’s in the…” meanwhile is the most gleefully dumb blues rock numbers the band ever recorded. “Stay” quiets down the epic gospel of Dark Side for something more languid and off the cuff. “Absolutely Curtains” is a brilliantly moody blend of synthesizers that eventually dissipates into a field recording of tribal song, hinting at the ambiguous tone the band were aiming to give the film’s finale (Schroeder, on the other hand, seems untroubled by his protagonist’s having finally located their hang-up free paradise in the middle of New Guinea). The album standout, however, is without a doubt Gilmour’s “Childhood’s End” which chugs away, throwing punchy hooks, with a vocal performance and slinky-ass solo that makes you wish he had been allowed to cut loose like this previously. It was, alas, the last Gilmour composition to get an airing in Pink Floyd until Roger Water’s left the band in 1985.

Like the rest of the album, “Childhood’s End” is less spacious and spacey than the Pink Floyd of old. You have to wonder if they would have left things as brilliantly sketchy had songs like these appeared on a proper album. In any case, this brief foray into soundtrack work did indeed mark the end of the Pink Floyd’s childhood. So go back and listen.   words / dk o’hara