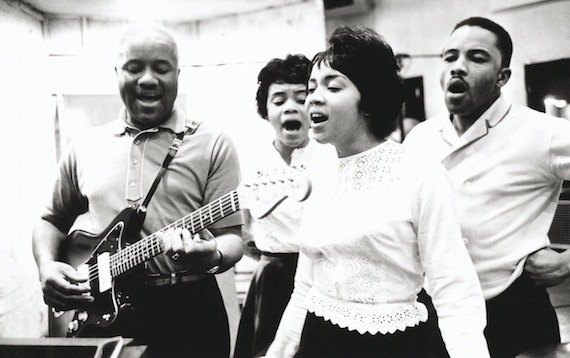 The first thing you hear as you set the needle down on “Faith and Grace” is the spectral sound of Roebuck “Pops” Staples’ guitar, and then the voices of his children, Mavis, Cleotha, Pervis, and Yvonne. These are the first sounds the Staple Singers put to tape, huddled around a microphone in 1953, recording for the first time for the Royal label in Chicago. “Faith and Grace” was issued along with “These Are They” that year, and the songs have remained unavailable until now, with the release of Faith and Grace: A Family Journey 1953-1976, which includes them on a 7” single along with four discs of music which charts much of the band’s lifespan, documenting their journey from gospel powerhouse to the “house band” of the civil rights movement, from righteous soul ballads to sly, slinky anthems. The band serves as a through line from the blues to gospel, from folk to funk, an American institution defined by the unique sonic qualities of Pops’ trembling guitar and Mavis’ powerful voice and a dedication to their personal faith.

The Staple Singers :: Low Is The Way

“Up until hip-hop, they touched on all these essential sounds of their times,” says Joe McEwen, producer of Faith and Grace, though the combo’s bluesy grooves would be sampled by Big Daddy Kane, Salt-N-Pepa, UGK, and Nelly. The Staples’ style and story was “spectacular” one, McEwen says. The boxset caps off a historic year for the Staples, during which the family’s story, and the late Pops’ in particular, was illuminated in panoramic style. First came the release of Pops’ final recordings, Don’t Lose This, completed by Mavis Staples and Jeff Tweedy, then, the remarkable Freedom Highway Complete, a live Staples set recorded at New Nazareth Missionary Baptist Church in Chicago in April 1965, at the height of the Civil Rights movement. With Faith and Grace, which includes the group’s earliest recordings, one’s able to trace American musical history.

“I look at Pops as the visionary of the family,” McEwen says. “His story is incredibly compelling, beginning with his birth and childhood on the famous Dockery Plantation, which was home to Charley Patton, Robert Johnson, and Howlin’ Wolf, among many others, and then his story subsequent, that he chose the path of the gospel and not the blues – though he learned to play guitar from Charley Patton – and carved out a singular path and sound for himself and his family.”

McEwen first heard the Staples as a teenager on Philadelphia’s “soul powerhouse” station WDAS, played by Louise Williams, “the Gospel Queen of Philadelphia.” The songs he heard were funkier and more pop-focused than the group’s earlier sanctified melodies, but he says that their ability to infuse whatever style they played with a holy fervor was all part of Pop’s spiritual mission. Before those pop crossover hits, the group had made inroads between the gospel scene and the folk movement.

“Unlike say Sam Cooke or Aretha Franklin or countless others, when they [moved] from VeeJay to Riverside and started playing Bob Dylan songs, it really wasn’t a full step [into the secular world],” McEwen says. “Doing the protest songs seemed to fit in with the spiritual songs. They weren’t hymns or sacred, but I think for Pops, in his mind, they were still preaching a message. It was a message of humanity and civil rights which went along with Dr. Martin Luther King…It was always related in their minds to that spiritual wellspring. I think the connection with the Civil Rights movement really brought that into focus.”

As the group signed to Stax, its songs got funkier and more universal in message. Working with Al Bell in Muscle Shoals, they cut songs like “Respect Yourself” — presented in the box set in two forms, the completed Staples take and a revelatory demo by songwriter Mack Rice — and “I’ll Take You There,” and though the celebratory and revelatory songs featured guitarists other than Pops, his influence and spiritual guiding hand was always there, as was the message of love and freedom.

“’Freedom Highway’ could be connected to ‘Uncloudy Day’ and ‘This May Be The Last Time’ and the old songs,” McEwen says. “Same with ‘I’ll Take You There’ and ‘Respect Yourself.’” He laughs that the group might have “crossed the line” with the carnal “Let’s Do It Again,” but just as the group’s spirituality refused to be confined to the church, occasionally its spirituality had to allow for some grownup ballads.

Faith and Grace illustrates the group’s repertoire and offers a wide-eyed look at their work, which would influence Curtis Mayfield, The Band, Bob Dylan, The Rolling Stones, Spiritualized, the Alabama Shakes, and more. In the pantheon of American music, McEwen says the Staples are “really only directly comparable to the Carter Family.” Its influence is still felt in the work of Mavis Staples, her husky, enveloping voice still sharing the message her father began preaching in 1953.

“There’s a passion and honesty there,” McEwan says, of the eloquence and enduring power of the Staples. “When they do ‘Why Am I Treated So Bad’ or ‘John Brown’ by Bob Dylan, you feel that.” words / j woodbury