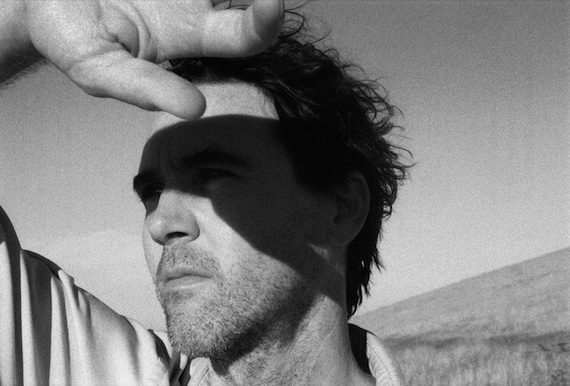 “Most of my albums are a simple collection of songs that have nothing to do with each other except that they were written around the same time and, perhaps, have some recurring themes,” songwriter Cass McCombs told Relix in 2013. His new collection, A Folk Set Apart: Rarities, B-Sides & Space Junk, ETC., is the result of taking away the shared time frame, a collection of songs written between 2003 and 2014, with little regard for genre — the comp encompasses Velvets-style drones, experimental cowboy poetry, mellow folk pop, and protest ballads — and disparate themes. If McCombs’ albums are normally scattered, A Folk Set Apart is even more so. “All my records are kind of like collections, but this one being the most obvious,” McCombs tells Aquarium Drunkard via the phone. But like his best work, it hangs together in a curiously coherent way, tied together not formally, but emotionally.

“I don’t know if it has flow, but it’s a weird journey and you can see the mutation of the music, of my voice even, and the people I play with…it’s definitely not commercial music,” McCombs says.
Over the last 15 years he’s worked with a number of collaborators, including guitarist Chris Cohen, drummer Joe Russo of Furthur, Mike Gordon of Phish, Tim Dewit of Gang Gang Dance, all of whom shade and color his songs and appear on the new collection. “I love playing with people who know their craft, who have a voice, something to say,” McCombs says. “You give them full reign to do whatever the fuck they want to do, they embrace that and do something with that.”

The collection is a testament to McCombs’ trust in his colleagues, but also his omnivorous musical tastes. He reels from garage punk on “I Cannot Lie” to gentle roots pop on “Three Men Sitting on a Hollow Log,” from ass shaking riff rock like “An Other” to the “hillbilly bop” of “Catacombs Cow Cow Boogie,” a “mutation of Duane Eddy, Link Wray, the Ventures — that kind of [music was a] transition from hillbilly to rockabilly to surf and something even more randy,” McCombs says. Many of the songs featured were released on split singles with artists like the Meat Puppets, Michael Hurley, and White Magic, sharing McCombs’ love of their music and their singular approaches.

“[The record] succeeds in schizophrenic posturing, hopefully,” McCombs deadpans. “I never could quite land on a sound. Some musicians I know find a thing they like and stick to it. I never could find one that I like so much that I wanted to marry myself to it. I just like fucking around with whatever, different instruments, different song formatting.”

And so McCombs’ records can feature loping, free-ranging epics like “Texas,” but also songs written with a folk template in mind, like “Bradley Manning,” celebrating US Army soldier Chelsea Manning, who leaked classified information to Wikileaks and is currently serving a 35-year sentence for her actions. “I wrote the song really quick, not making it this long winded thing,” McCombs says of the song, its tone landing somewhere between Woody Guthrie and Neil Young. “I just wanted to boil it down. This is an impression of an interesting person who I think was completely in the right. It’s a dirty, low down shame what they’ve done to her. I wanted to say thank you to Chelsea and recognize her humanity.”

McCombs’ desire to explore, thematically and musically, goes back to high school, when he played “bluegrass, jazz, psychedelic music, and also punk music.” He was drawn to music that swam in “complicated, murky water,” sounds that were confrontational, exploring the personal, political, and sexual, exposing “gender hypocrisy, pointing fingers, but also with groups like Flipper, pointing the finger back at oneself,” McCombs says. “It’s not nice, all the time. And it’s not easy.”

McCombs doesn’t make things easy, himself. His records, beginning with 2003’s A, don’t unfold immediately, taking time and deliberation to process. It’s not a knock; songs like the mournful Laurel Canyon-style “County Line” from 2011’s Wit’s End and the Karen Black sung “Brighter!” from 2013’s Big Wheel and Others are plainly beautiful, but McCombs adheres to a chaotic vision, tossing in songs like the scuzzy “Satan Is My Toy” or the rambling “Everything Has to Be Just-So.” He prefers to allow for that strangeness, in his track lists and playing live with his band in the studio, allowing for unexpected bursts of spontaneity (listen to the out-of-phase guitar solo by Cohen in “An Other,” a mysterious studio accident that helps make the song).

“I think there’s so many ways you can approach that concept,” McCombs says of allowing for the unpredictable. “One way is just accepting the splatter of chaos — the paint runs and goes where it wants to go. Sure, we as artists have control over certain things, but we don’t have control over other things. We definitely don’t have control over other people. Everyone on the record plays however the fuck they want to play. That’s it. I just think it’s kind of a personal philosophy to accept other people, accept chaos. My concept of art is…I’ve tried to control situations and it’s impossible, it’s unfulfilling even if you can control other people. I don’t see the point. I don’t think a great artist is one who can control other people — I think that’s a major fucking mistake when people think that.”

McCombs makes no effort to control his songs, and when discussing them, he’s quick to shrug off declarative statements with an “I dunno.” His goal, it feels listening to him explain it, is to minimize the ego in his art all together. “It doesn’t really matter,” McCombs says. “These questions of ‘who am I’ are irrelevant to me. I don’t care who I am, and I definitely don’t care to promote who I am in any way.”

By refusing to tether himself to the compositions, they become weird, unique things all on their own, like “Texas,” co-written and sung with Mike Gordon. It’s perhaps the farthest out there song on the record, but somehow it feels natural. “I had wrote it as a corny ass poem, a Jimmy Stewart-style poem,” McCombs says. Working with Gordon, it became something else. “It’s so effortless with Mike. He just started the exquisite chorus in two seconds and the thing was finished in five seconds. I don’t know how it’s possible, cause it’s like seven minutes long.”

McCombs thinks about it for a moment and sums up the song, his best work, and A Folk Set Apart: Rarities, B-Sides & Space Junk, ETC. itself, simply. “We folded time.” words / j woodbury