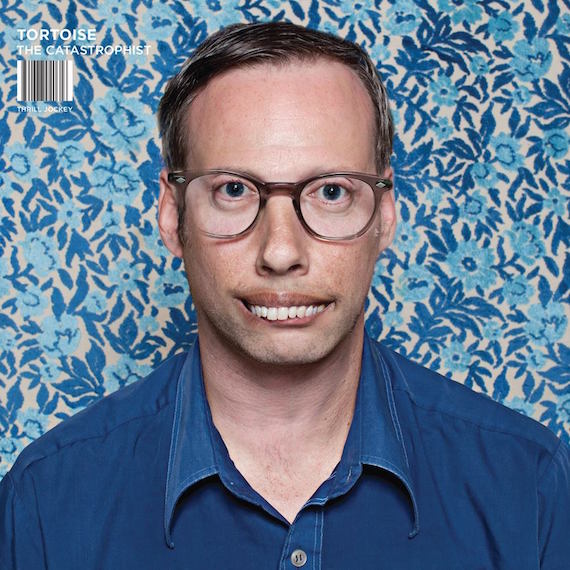 Sitting on a green room couch at the Teragram Ballroom in downtown Los Angeles, Tortoise guitarist Jeff Parker and drummer John Herndon nod in sync when it’s ventured that the band’s new album, The Catastrophist, is rooted in the sounds of Chicago.

It goes beyond geography. The group’s seventh album, and first since 2009, it’s also the first released with two-fifths of the band – Parker and Herndon – living in Los Angeles, while Dan Bitney, Doug McCombs, and John McEntire live and work in Chicago, where the band was formed in 1990.

But even beyond its membership’s living arrangements, The Catastrophist is a hometown record, owing its roots to a commission by the City of Chicago to write a new work reflecting the band’s ties to the city’s jazz and improvised music scenes. “We got commissioned to write a suite of music by the city of Chicago [in 2010] and that kind of gave us an excuse to work on some new material,” Parker says. “We had all of that music, which we had performed several times…so we had a pretty solid foundation with all of this new material.”

The Catastrophist is in line with the band’s legacy, exhibited on classic records like Millions Living Will Never Die and TNT. There are pulsing soundscapes, like the Devo-inspired title track and the brief “Gopher Island,” and moments of taut interplay, like “Ox Duke” and “Tesseract,” but the group’s sense of humor and playfulness is always at work. On two songs, the instrumental band employs vocals, with Todd Rittman of U.S. Maple and Dead Rider on a cover of David Essex’s 1973 glam standard “Rock On” and Georgia Hubley of Yo La Tengo singing “Yonder Blue,” a gorgeous, soul-inspired song.

“We’d been talking about having guest vocalists on a record since the beginning of Tortoise,” Herndon says. “How or why it happened this time is probably because…[we thought] shit or get of the pot, really.”

The songs recall the band’s last collaboration with a vocalist, 2006’s The Brave and the Bold, on which the band transmuted material by the Minutemen, Bruce Springsteen, Richard Thompson, Melanie, Lungfish, and more with the help of Bonnie “Prince” Billy. Originally, the group approached art rocker Robert Wyatt about collaborating, but the Soft Machine legend politely declined.

“He’s retired,” Parker says. “We decided, let’s just have it be our friends and family,” Herndon says, noting the band’s long ties and friendships with Rittman and Hubley.

Parker and Herndon chuckle as they describe the decision to cover “Rock On,” hatched by “John and Doug, who were spending the most time the studio smoking bongs,” Herndon laughs. But the song proved more surprising than they initially realized. “It’s a pretty unique song,” Parker says. “I was like, damn man, there’s no guitar in the song? So I played this cornball, funky Meters kind of guitar part.”

A song about rocking – minus rock’s most signifying instrument – hints at “the meta level of things,” Herndon says, and offers the kind of curious juxtaposition that appeals to the band’s desire to challenge perceptions and push buttons.

“We like to fuck with people some,” Parker says. “We fuck with each other all the time.”

“Ain’t that the truth,” Herdon says.

Though the album was inspired in part by the improvisational and jazz scenes of Chicago – which Tortoise’s members are all involved in to degrees – The Catastrophist doesn’t veer away from the band’s tightly constructed work in the past.

“It’s music to listen to,” Parker says, noting the harmonies, melodies, and traditional song craft that removes Tortoise from the realm of analytical music. The band makes heady music, sure, but it’s constructed with the listener in mind, and it rewards braving the challenges with evocative, pleasurable music.

While the album’s roots trace back to the exploration of the Chicago’s free music traditions, the band doesn’t improvise much on the road. But Parker says the group’s improvisational dynamic is always at work, and that the songs are born in space that allows for each member to contribute new and exciting ideas to the whole. Herndon nods in agreement.

“If I bring something to the band and somebody plays something that I would never think of, that’s very strange and beautiful, that’s ideal for me,” Herndon says. words/ j woodbury