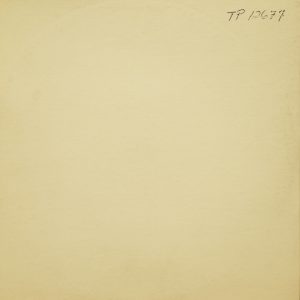 It’s kind of hard to fathom that, at one time, Tom Petty & The Heartbreakers were a band that a lucky punter could see in a small club. Fortunately, Shelter Records had the foresight to record the group on a night when they were most definitely ‘on’, back in December 1976 at Paul’s Mall, Boston. Unbelievably, the group didn’t even headline that night, Al Kooper did.

Unfortunately, the official release was a promo-only one sided job that was drafted in limited quantities for radio and press in 1977, just as the group was starting to gain popularity. Not an easy record to find – beyond the small pressing, the nondescript white cover has a printed number (made to look like a test pressing) that mentions nothing about the contents within.

Which brings us to this version of “Fooled Again (I Don’t Like It)” – the highlight of the set. And as great as it sounds here, it must have been mesmerizing to hear the nascent group (with this amount of talent and songwriting verve) up close and personal, at the tail end of the endless boogie era. Tom & The Heartbreakers helped to usher in a whole new era, as evidenced here, by drawing on the best of their forerunners while adding their own creative flavor.  While the marketing suits did their best to eventually try and lump The Heartbreakers in with the new wave scene, the fellas show that they were a wave of their own, and one concurrent with the rise of punk. words / d see