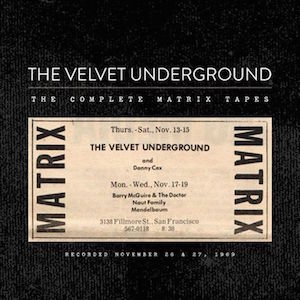 No other rock n roll band was recorded live in the ’60s as frequently as The Velvet Underground, thanks to characters such as ‘The Professor’ in Boston, and future guitar legend Robert Quine. The Velvets incited such fervor and dedication among their fanbase that a surprising number of folks lugged the large tape recorders of the day out to gigs to capture the magic. Unfortunately, most of these tapes can be a difficult listen, bathed in their lo-fi , no-fi and (a scant few) mid-fi quality. A whole bunch of Quine’s lo-fi recordings (more on that later) were officially released a decade or so ago, and several of the other recordings have been released on vinyl in recent years in questionable legality. Being a fanatic, I’ve devoured them throughout the years — beginning with tape trading, then on to CDR’s. Just like those who taped them back in the day, I find every note played by the Lou-led incarnations to be at the very least a worthwhile listen, at their best a revelation.

The Complete Matrix Tapes release is the greatest revelation of them all; while many of these performances contained here have seen official release over the years (both on The Quine Tapes archival set, the seminal Live 1969 double LP released in 1974, and a controversial truncated sampler as part of the Velvet Underground deluxe edition a few years back), none have been heard in this bulk and/or this superlative audio fidelity. The Matrix was a small, intimate club in San Francisco that was co-founded by The Jefferson Airplane’s Marty Balin. After a disastrous first run in San Francisco at The Fillmore Auditorium in 1966 (as part of the multi-media Exploding Plastic Inevitable, as presented by Andy Warhol, which was publicly debased by promoter Bill Graham), the group began making inroads in several cities (including San Francisco) after the departure of John Cale and the introduction of Doug Yule. While the Velvets played the larger Family Dog venue regularly, they were booked to play the tiny Matrix for a weeks worth of gigs in November 1969.

While there is no denying the innovation of the Cale era, the Yule period saw The Velvet Underground morph into one of the greatest live bands of their time. Drawing upon an improvisational style that was far less aggressive than the band had explored with Cale, the 1969 Velvets were right at home on the ballroom circuit, though in a creative league of their own.

The intimacy of the room seems to have put Lou Reed at ease; more open to clever stage banter (without a hint of cynicism) than at any other time during his career. A great chunk of this banter is captured on Complete Matrix, and it’s both fascinating to hear and also lends itself the vibe of the musical improvisation. While we hear several versions of many songs, there is no tedium in the variations. This set is full of alternate lyrics, varied tempos, and just general majesty by a band operating at peak powers. The whole package is made even more remarkable by the sort of sound quality that makes us feel as though we are in the room with the Velvets. While very few of us were lucky enough to experience that in reality, this set is a more-than-acceptable alternative.

The highlights are numerous, so I’ll only focus on a few. In addition to these examples, all of the incredible performance as heard on Live 1969 are here, but even better. From the grand drama of “Ocean” to the fist pumping extended coda rave-up of “What Goes On” (which is so damned exciting that it could easily go for another 8 minutes), there’s a myriad of other incredible performances here that make for what is one of the greatest archival releases in the history of archival releases. The performances here are equal to (and in many cases, surpass) the Velvets four incredibly influential, essential, and timeless studio LPs.

The Velvet Underground :: Over You (version 2)

While this song was never released by the VU in a studio take, it has long been available on Live 1969 since 1974, and finds Reed at his most tender. While that recording is also included in this set (labeled as version 1, in far better sound quality than Live 1969), this slower reading features different lyrics, and the laconic tempo tugs beautifully at the heart strings.

While perhaps the most well known of all Velvet Underground songs, it’s impressive that a live version (that is quite similar to the Matrix-taped version that appeared on Live 1969) could pack the type of emotional wallop that this one does. However, in my opinion, this version is the most revelatory track in the entire set, and a testament to the poetic genius of Lou Reed. The lyrics are almost wholly different here, not only to the studio take on Loaded, but also the Live 1969 take recorded within the same week. Any one of the lyrics in any of these versions would be a major work for any songwriter, and Lou was able to spin three tales within the context of this song that are, arguably, all equal in quality.

While this performance was captured on The Quine Tapes, there is simply no match to hearing this manic, blown out performance in the superb quality as heard here. While Sterling Morrison was quoted as saying that he felt that the band didn’t really get to play at the volume and intensity at The Matrix that they could in larger halls, this performance is off the rails in its drive and punch; perfectly capturing the crazed amphetamine rush that the song inhabits. The original studio version on White Light/ White Heat seems almost like a sketch compared to this fully fleshed out version. words / d see

3 thoughts on “The Velvet Underground :: The Complete Matrix Tapes”