Oscar season is a good time to appreciate the few remaining directorial titans in American cinema, and at the top of that list is Quentin Tarantino. There is a reason no modern filmmaker is more scrutinized than Tarantino, and it’s not just his penchant for saying things that piss people off. The auteur has commanded the movie-going public’s attention for 25 years, through his directorial efforts on eight feature length films. And despite some dabbling in other forms of show business, he is first and foremost a director of cinematic art – there is a distinctness to everything he makes. A Tarantino film is an event, a project, a total composition, rather than just a piece of throwaway entertainment.

You get the sense that not an inch of film strip is wasted in his movies. From contrived dialogue to deliberate camera angles and lightly veiled homages to other works, his films are visual and intellectual affairs that challenge the viewer to think, remember and wonder, while simultaneously inducing visceral reactions (see: the adrenaline shot in Pulp Fiction or the basement scene in Inglourious Basterds).   A big part of why he’s successful is his diverse inspiration. At root, each of his films is a throwback to a bygone era. They are shot with an eye for the big screen (The Hateful Eight was shot on 70 mm film), and always feature a mix of camp and spectacle appropriate to the grindhouse genre of the 1970s.

This was the era when everything suddenly became a race to show the most gore, most sex, most absurd dialog, most exploding sacks of desiccated goopy organ slop on celluloid. Movies were being served up for double feature drive-in audiences of college kids and creeps on the societal fringes, chum for junkies and runaways splayed out raw in broken down cities where unemployment ran high. After all, the economy was in the shitter, pollution choked city skies, the war in Vietnam turned to a bloody quagmire, the counter culture hippies lost their idealism and turned to outlaw violence to confront their boredom–or just went to college–crime rates surged, terrorist bombings became commonplace, and urban fashions went dark, saturated and disheveled. Our movie heroes became a reflection of who we were, and we were in an angry, cynical funk.

The grindhouse movement was an economic trend at root, as producers figured out that it cost less to shoot fast and cheap, filling each production with raunchy and controversial imagery and subject matter. Ironically, Tarantino later took these bargain-basement guerrilla tactics and gave them the budgets and artistic eye they never had in their heyday. And that in essence is the secret sauce to his renowned filmmaking style. Granted, if you aren’t feeling the approach itself, the movies get old fast. But here are five that made a lasting imprint. 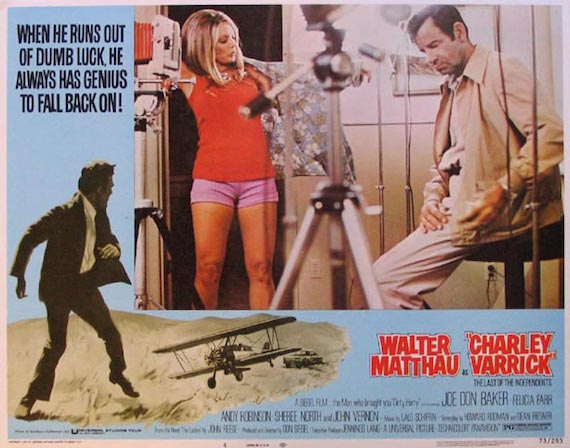 Charley Varrick (1973) – 1973’s Charley Varrick is a movie that is years before its time. The elements of surprise are plentiful and best encapsulated in a twist ending that 20 years later became a common movie gimmick. But the biggest shocker is Walter Mathau as a gum smacking, low-key criminal badass who looks like an even keeled plumber but plots robberies that would make Heath Ledger’s joker take notes.

I’m too young to know what Mathau’s contemporary reputation was around the time he made this movie, but I remember the guy as part of the Odd Couple and Grumpy Old Men. A cranky old bastard with a goofy look on his jowled face, waddling around in perpetual search for a toilet. Charley Varrick is not that Mathau. This Mathau faces down dangerous mafia thugs, talks slick, beds beautiful women, and plays a game of high stakes chess with both law enforcement and a global criminal syndicate. This Mathau is a Kaiser Soze-esque plotter with a bigger heart.

Directed by Don Siegel, a legend in his own right whose resume includes Dirty Harry and Invasion of the Body Snatchers, Varrick gives you some of the grit and darkness of the era. But you also feel a bit of humor and hope. The “Ah-Ha” moment toward the end will have you thinking back to earlier scenes. Clearly Pulp Fiction and Reservoir Dogs owe a little something to this one. Also, Joe Don Baker’s turn as a gentlemanly mob killer is noteworthy. 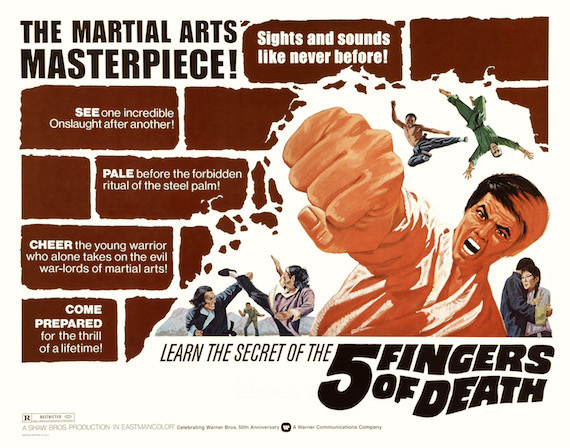 5 Fingers of Death (1972) – The central music in this one was pulled directly for the soundtrack to Kill Bill episodes 1 and 2, just as the title itself was ripped as a plot device. Originally released as King Boxer, 5 Fingers of Death is a Hong Kong classic from the Shaw Brothers that has inspired so many subsequent martial arts movies as to now feel cliché. But this is about as close to a masterpiece as low budget ‘70s Kung Fu gets. It has all the necessary parts: cruelty, blood, mysticism, tribalism, ferocious fight scenes, gruesome weaponry, and horrible sound and voice dubbing.

It hasn’t aged well, as the sound and editing are of inferior stock in comparison to what’s possible with modern digital tools. But technical flaws should be expected with a vintage martial arts flick. The story follows a protagonist fighter training to take down a rival warlord. He gets jumped in the woods by Japanese bandits who break his hands and spirit. As with all great hero journeys, he must gain back his strength, learn the secrets of the ancient all powerful iron fist of death and earn his revenge by pulverizing an endless lineup of thugs, minions, soldiers, ninjas and boss men. The fight choreography and action sequences are creative and dirty. You’re welcome, Enter the Dragon, Kick Boxer, Karate Kid, Kill Bill and pretty much every ninja movie ever made. 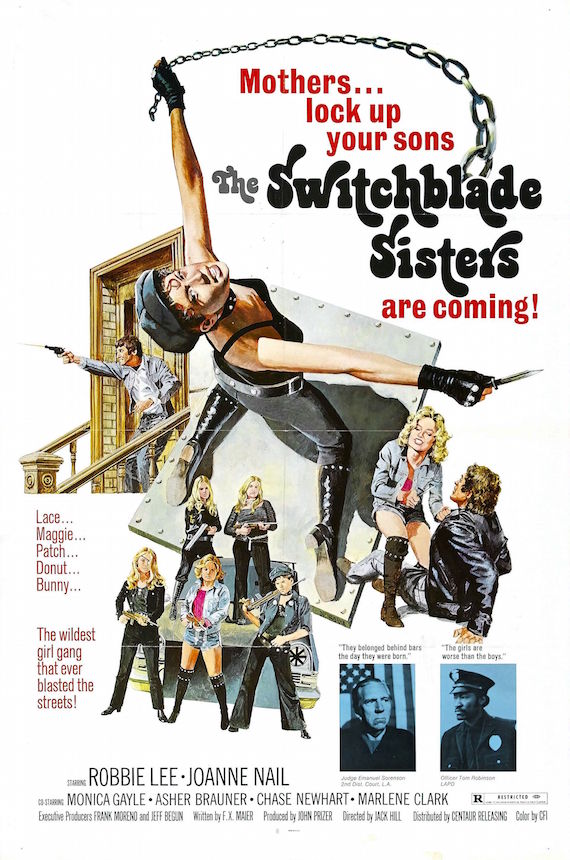 In a way, Switchblade Sisters is the perfect grindhouse movie. It contains a number of classic exploitation elements rolled into one: street gangs, Blaxploitation, reform school girls, prison fights and a post-industrial future. It boasts nudity and gratuitous violence and language that is shocking even by today’s liberal standards. The movie’s utter trashiness is anything but coincidence, as it attempts to awe and disgust you from the opening scene, where a gang of sexy teen miscreants assault a government worker in an elevator. They brandish dirty weapons and dirtier mouths, and the 70s funk soundtrack in the background only heightens the sense of urban rot.

But the difference here is that the story and characters show depth. The central story is a power struggle, not unfamiliar to Shakespearean drama, in which a gang matriarch struggles to retain control in the face of a new member, who is hotter, tougher, more charismatic and more popular among the rank and file. It’s easy to have genuine sympathy for the protagonist, even as her scheming becomes more sinister and her paranoia more dangerous.

Beyond the story arc itself, Switchblade Sisters touches on a number of social issues in a complicated way that separates it from pure sleaze. There is an ambiguous rape scene that isn’t treated in black and white terms, making it feel far more disturbing than the standard exploitation model of violent sexual assault. And despite moments of extreme, needless violence, the film hints at the poverty and lack of opportunity that drives its central characters to a life of street crime. 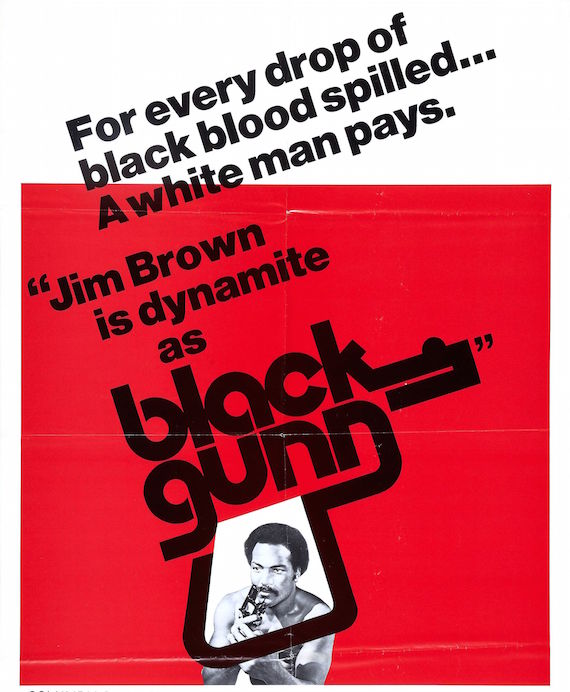 Black Gunn (1972) – Black Gunn stars Jim Brown as a night club owner forced to go on a vengeance-fueled rampage against heavy-hitting Italian mobsters after they take out his militant Black Panther-inspired brother. This is standard unexceptional Blaxploitation that makes our list for a few reasons. First, it has a strong cast. Jim Brown and Bernie Casey carry the flag for black genre actors of the era, while Martin Landau (in an odd role) brings considerable mainstream weight as the racist mafia villain. Second, it has a classic 1970s funk soundtrack by Tony Osborne that is pitch perfect for its time. The styles, cars and outrageous wallpaper in every room add to the tone. Finally, the overtly racist story line is an excellent example of the social pandering that powered the Blaxploitation movement.

Whether intentional or not, the black characters are nearly as racist as the white ones, with the primary difference being that it’s easier to sympathize with the black cause due to some extra filthy descriptors used for dramatic effect by “the man” – as well as other cultural baggage we don’t need to dissect, here. Regardless, the entire premise of the film depends on an unbridgeable divide between races, and even as we morally side with protagonist Gunn it’s difficult to not feel the sting of a movie production meant to squeeze a buck out of our kneejerk response to racial injustice. It’s a dirty trick.

The movie’s simple underlying concept, by the way, speaks to a plot element that shows up again and again throughout Mr. Tarantino’s catalog, that of revenge. In fact, revenge plays a critical part in every feature-length film he has directed. 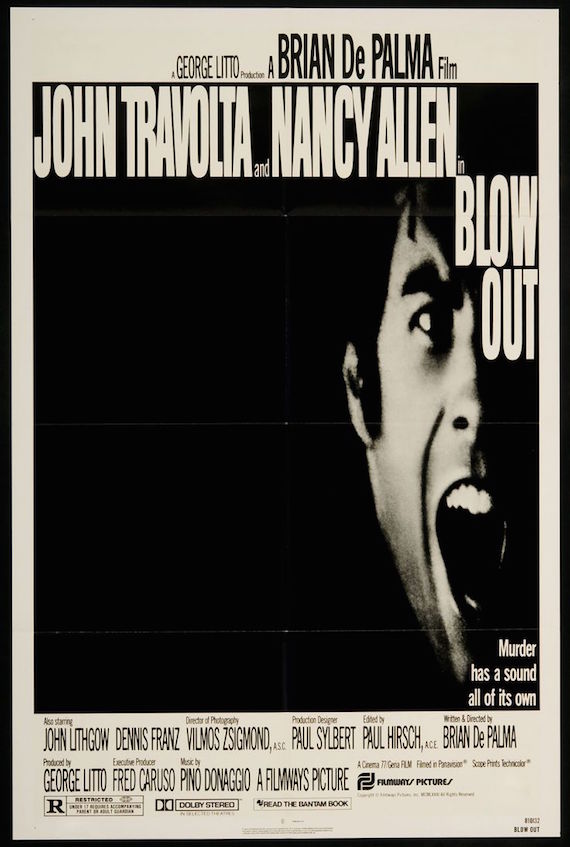 Blow Out (1981) – Speaking of Tarantino’s career, if one thing has been true throughout it has been a stubborn refusal to stick to filmmaking convention. Whether it’s putting modern music in films set in the past or placing scenes out of sequence, Tarantino has a well tread history of going maverick. I’d bet dollars to donuts that he gained some of these tendencies watching Brian De Palma films, with 1981’s Blow Out being high on the list in terms of originality.

De Palma is not only a master of suspense and psycho-drama, but he’s also the kind of director who has no qualms killing off important characters, mixing genres, or sympathetically delving into the mind of a debased sexual pervert. Grasping for the new and different, often to great effect, his early films, before the realities of life and success got in the way, offer a model for cinema as fine art.

Blow Out mashes up political commentary and an insider view of the movie business, while also pulling off some of the best POV camera work in film history. In one filming sequence we see everything through the eyes of a voyeuristic predator prowling for a woman to murder, and the on-screen result is magic. The steady cam shots and paced music make for a beautiful and suspenseful audiovisual arrangement. It’s hard to critically review 35 years after the fact, but the style of this scene must have been imaginative, unprecedented and utterly terrifying at the time of its release.

Reportedly, Tarantino believes John Travolta’s performance in Blow Out, where he plays a low-level B movie sound guy, to be one of the actor’s greatest roles. High praise from a grindhouse-inspired legend. words / j campbell