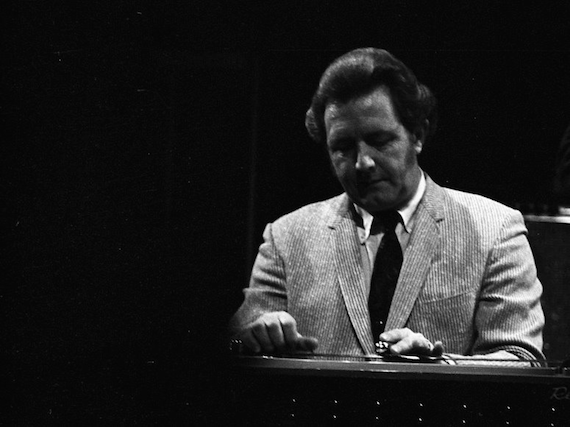 This mix picks up where All Roads Lead To Red: A Pedal Steel Mixtape / Tribute left off, delving deeper into the sessionography of the Velvet Hammer, Orville “O.J” “Red” Rhodes. While perhaps best known as Michael Nesmith’s musical foil on the former Monkee’s 1970s country rock masterpieces, Red also played steel on countless LA sessions in the 1960s and 70s. In addition to leaving his unmistakeable mark on such hits as James Taylor’s “Sweet Baby James” and The Carpenters’ “Top Of The World” Red also played on album cuts by artists including The Beach Boys, The Byrds, Gene Vincent, and Nancy Sinatra. The tones that emanated from Red’s steel sounded a lot like Red looked: they were round, playful, thick, smiley, and stoney. His inventive licks and restrained fills   wove within the fabric of the LA scene a thread that bound diverse artists and distinct genres together into something resembling a coherent sound. words / m dawson

6 thoughts on “All Roads Lead Back To Red: A Pedal Steel Mixtape / Tribute Vol 2”