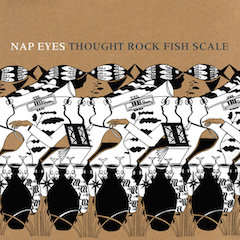 Last summer Paradise of Bachelors introduced the Nova Scotia quartet Nap Eyes to a wider audience with the US release of their debut album, Whine of the Mystic. The band has seemingly grown by leaps and bounds between laying down that record and their recently released sophomore offering, the excellent Thought Rock Fish Scale. Sounding tighter and more self-assured, Nap Eyes weave through eight airy, existential numbers, with vocalist Nigel Chapman evoking the hallowed likes of Jonathan Richman and Lou Reed.

Album opener “Mixer” finds our narrator a fish out of water at a party. Indie-rock cliché, but yonder there’s subversion. Chapman looks to Jesus, meditation, self-cleansing and the ridding of possessions, yet the tune’s unhurried and sleepy pace suggests a half-measure. Both a desire to change, but comfort in the stasis. words / c depasquale