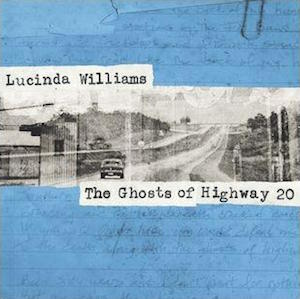 Is there ever a point in your life where it’s in some way easier to lose someone? Does getting to spend a little more time with them – well into and past their expected life span – somehow ease that pain, or does it make it all the sharper? Does the larger swath of places dotted with your memories of them give you happiness or does it make the whole Earth seem haunted?

Lucinda Williams’ twelfth studio album, The Ghosts of Highway 20, is as much about the memories of her father, poet Miller Williams, and her own life as it is the characters who dot the length of the title road. The term ‘ghosts’ here holds a variety of meanings — memories of loved ones, people who exist when we need them to and fade out when not, and our past selves. All of this creates a fantastic tapestry interwoven with the heartbreak over the passing of her father in 2015. The previous year had birthed Down Where the Spirit Meets the Bone — an lp marking the first collaboration between father and daughter, with Lucinda adapting one of Miller’s poems for the album’s opener,   “Compassion”. And while that was the only track Miller Williams was directly a part of, on this album his presence is a constant.

Opener “Dust” (adapted from her father’s eponymous poem) puts the melancholic tone of the album to paper quickly. “It’s a sadness so deep / the sun seems black / and you don’t have to try / to keep the tears back / ’cause you couldn’t cry if you wanted to / even your thoughts / are dust,” Williams intones in the song’s first lyrics. There’s a point in grief where all of our feelings seem to go dry and it’s in these lost moments where chunks of this album dwell so perfectly. “Death Came” lays out a lengthy series of questions – mostly about why “death gave you his kiss.” It’s a great reflection of the moments of agony where we question why things happen. “Doors of Heaven” follows immediately with its narrator pleading for the title objects to open – tired of living, it’s time to go somewhere better. It’s maybe the closest thing to a rocker on this album, yet remains subdued, keeping the feel of all that has come before it.

There are other songs that touch at the passing of her father – “If My Love Could Kill” is an especial standout on the second disc – but the rest of the album finds its inspiration in echoes of that event. “Place in My Heart” and “Can’t Close The Door On Love” find the rhyming interpretations of those we love without choice and those we choose to love. And even the closing 12-minute “Faith and Grace” finds itself lyrically calling back to the album in Williams’ catalog that has the most in common with this album, 2004’s Essence. Williams repeating the phrase “get right with God” a number of times late in the song’s running time calls attention to how Williams herself has changed over the last twelve years by echoing “Get Right With God” from Essence – and how we all have to adjust. “A little more faith and grace,” are the last words she intones in the song. On Essence she was pleading for a way to better herself to a higher power; here she seems to have found an answer of how to do just that.

Highway 20 in Louisiana is a 36-mile two-lane road. It’s the type of highway that anyone that has grown up in a more rural area of our country knows all too well. You know the twists and turns, you know where the cops sit, you know where to get the best hot dogs or even who lives in each house along the way. You also have memories of moments of your life that happened along that road. The title track – which leads off the second disc of the album – hones in on this type of highway as its own river of memories. “I know this road like the back of my hand / same with the stations on the FM band,” Williams sings softly at the outset of the song. It’s an incantation of comfort but also of an intense weariness. And as a centerpiece for this album, it serves as a reminder of all the discoveries – gleeful and painful – that life brings us. words / j neas