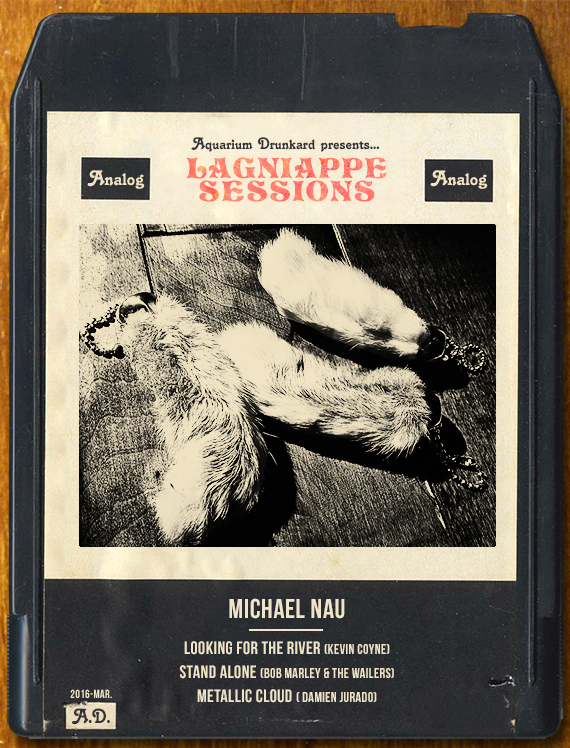 Last November we debuted a track off of Michael Nau’s solo debut, Mowing, out now via Suicide Squeeze Records. And though this record bears Nau’s name alone, it’s a fine addition to the canon of Cotton Jones’ brand of Cosmic American Music. There’s no lack of Whitney McGraw’s smoky backup vocals and glacial autoharp, and no lack of marimba-touched exotica paired with pedal-steel country.

This latest installment of the  Lagniappe Sessions features Nau solo, in a trio of lo-fi, homemade covers, paying tribute to the likes of the unsung Kevin Coyne, fellow cosmic wanderer Damien Jurado and reggae avatar, Bob Marley, The artist, in his own words, below…

About five years back, someone in Raleigh, NC introduced me to Kevin Coyne’s music. I’ve been going pretty deep ever since   – there’s so much music, so much variety in vibe. This one’s the most recent song that I’ve gotten a bit hung up on.

I’ve been a Damien Jurado fan for a long time. I remember hearing Water Ave S for the first time. Then, all these years later. . .those last 3 records are so good. The consistent quality of work – the openness & ability to go further out, over such a span, is inspiring.

This one has such a nice melody. It’s seemed to follow me around for a while. I was asked to record a few covers a good while ago – it’s tricky. This is a salute.