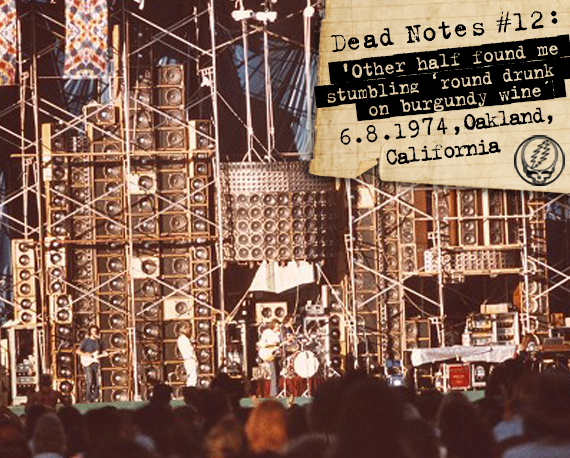 1974 is one of the greatest and most transformative years within the Grateful Dead’s history, with two major events setting the tone: the official unveiling of the infamous ‘Wall of Sound’ and the band ominously playing “The Last One”, on October 20th, marking the beginning of an extended hiatus.  The Wall of Sound was the brainchild of the infamous LSD chemist-cum-audio engineer and early Dead benefactor, Owsley “Bear” Stanley, in collaboration with instrument manufacturer Alembic. The completed system (weighing 75 tons with 11 channels powered by 48 amplifiers, driving 586 speakers with 28,800 watts of continuous power) made its debut at Daly City’s Cow Palace on March 23 (Dick’s Pick 24). Now, even audience members in the upper reaches of the cavernous sports area could hear every strum of guitar, every plunk of piano and crash of cymbal. Phil Lesh reaped the biggest benefit of the new system with a quadraphonic encoder that sent signals from each of his four strings to a separate channel, and set of speakers, producing near subsonic notes that reportedly felt as if they were rising from the floorboards.

The groundbreaking aural milestone did not come without its own set of challenges, as two Walls of Sound were needed in order for each road crew to leapfrog from city to city due to the time-consuming nature of the setup. The situation was compounded by  organizational issues, “new” versus veteran employee dust-ups, and the financial strain from lugging the sound system across land and sea — all exacerbated by an ever-escalating use of cocaine. By the fall, after a terrible “death march” across Europe, the band along with management agreed that enough was enough and a decision was made to take some time off from touring. As the house lights went up one last time at the famed Winterland Ballroom the band retreated into the night…and for the first time in a nearly a decade would not perform regularly in 1975, save a handful of one-off gigs.

Long time band compadre Bill Graham and his production company kicked off their 1974 summer concert season,  Day on the Green, with a smokin’ dual headline billing of the Grateful Dead and the Beach Boys along with openers New Riders of the Purple Sage and Commander Cody and his Lost Planet Airman. Tickets were just $8.50 with music starting at the very un-rock ’n’ roll hour of  10 AM  as Cody set the tone for the day exclaiming, “Why don’t I see more of you hippies at baseball games?” before launching into “Smoke that Cigarette.” As the previous night’s hangovers gave way to farmer’s tans and Acapulco Gold clouds, The Beach Boys took the stage allegedly surrounding themselves with police tape to keep the Grateful Dead and their brood of psychedelic hooligans from their stuff (because, as we all know, they were really on the “straight and narrow”) while delivering an inspired set of classic surf ’n’ roll. Deep in the afternoon haze, Garcia fingers the opening to lick “Playing in the Band,” the Dead’s clarion call to the masses of their pacifist ethos, sending the band into a 40-minute rigmarole that transcends boundaries of time and space. As the opening section closes, Phil gallantly leads the group into the jam as Jerry starts to explore the inner jungle with his spacey wah-wah fills. Bobby’s breakneck rhythm hacks away at the dense terrain as Jerry descends into the “Tiger Jam” with ferocious notes while Phil’s ear-splitting, otherworldly noise transmissions bring the band to full roar.

The feedback then  eases into a series of jams by Billy and Keith as Jerry attempts to reintroduce the “Playing” theme. But the rest of the band passionately slips into a “Wharf Rat” riddled with a pummeling series of Phil bombs as our derelict hero pontifies his women and maker before wine and doin’ time for some other fucker’s crime. Jerry and Phil underscore the echo of his wishful decrees with a beautiful blues jam that begins to saunter off into the early twilight before exploding back into the “Playing” reprise. And just as quick as it began, it crashes to an end leaving 65,000 heads looking for answers in the treetops of their minds.words / d norsen