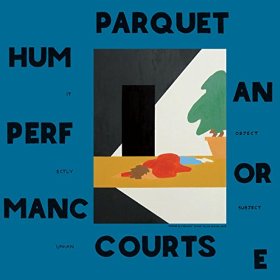 The New York City-based Texans of Parquet Courts have been responsible for some of the best post-punk rock & roll of the last half-decade. Coupling Wire and Silver Jews-style riffs with Reed and Richman cadences,  songwriters Andrew Savage and Austin Brown are among the  wittiest  observationalists  working in the indie rock landscape.

They’ve also proved themselves an ambitious bunch. Starting with  their excellent debut,  Light Up Gold,  the band’s stayed on an artistically restless tear: Sunbathing Animal  found ways to sweat more soul out of their  taut framework; Content Nausea found Brown and Savage getting loose;  Monastic Living  was wild and improvisational.

The band’s latest, Human Performance,  is their boldest, most confident record yet. It’s a big record, tackling big themes and employing big sounds,  but specific too. Forgive the hyperbole, but it’s like the band’s London Calling or Green or Double Nickels on the Dime, the  sound of a young band challenging itself, opening up, and creating the most personal record it could, cracking the format open and  solidifying what makes the band tick.

Recorded over multiple sessions, at  Sonelab in Western Massachusetts, at the Wilco Loft in Chicago, and at the Dreamland Studios in upstate New York, a former Pentecostal church which doubled as the band’s lodging while recording, Human Performance  is the result of more time, editing, and creative pushing than anything the band has ever put to tape.

“This was a different process by design,” Brown says over the phone from Marfa, Texas, where the band played the Marfa Myths  festival alongside experimental composer  William Basinski, Fred and Toody of Dead Moon, Heron Oblivion, and other heady peers. “We wanted to get different results. Just all around, we wanted to make it as different as we could.”

The band succeeded. “Berlin Got Blurry” incorporates a newfound  cowpunk twang, “I Was Just Here” lurches with punk funk swagger, and the title track is the most affecting thing the group’s ever released. But the song most out of left field is “Captive of the Sun,” incorporating hip-hop influences and dense, layered production.

For Brown, the song represented something crucial. Though he  wrote it as a “typical” Parquet Courts song, a “fast, screaming” punk rock thing, he wasn’t satisfied by it. In fact, the song upset him. He kept thinking, “I don’t hear any of myself in this song.” The thought persisted: “I’m not getting anything out of this.”

“There was no an overdub I could make that would turn it into what I wanted it to be,” Browns says. “It sounded like a Parquet Courts song, which was so boring to me.”

In the past, the song might have just been pushed aside, or even recorded as it was. Things moved quicker before. There wasn’t time for deliberation or experimentation. This time,  Brown kept tinkering, often on his own, when the rest of the band would take breaks or step out for a bite. There was a Fairchild compressor at Dreamland, the piece of studio equipment responsible for the drum sound of Led Zeppelin’s “When the Levee Breaks.”

Brown suggested drummer Max Savage record a “Levee”-style drum part, grafting the half-time beat to the quick pace. The sound inspired him and served as a validation of the group’s mission to push itself creatively. It doesn’t sound fussed over, doesn’t lose touch with what made the band’s songs work in the past, but it’s something brand new. The feeling of that newness was essential to the creation of Human Performance.

“Skull shakin’ cadence of the J train,” Brown intones  (almost raps!), his voice low and monotone. “Marching on and static, lyrics shout a retort/to the melody/abandoned in the key of New York.”

“No one knew what was going to happen to it,” Brown  says of the song. “It was one last final surprise. It sounds so different from anything we’ve ever made and that made it really important to me.” words / j woodbury

3 thoughts on “Parquet Courts :: Captive Of The Sun”