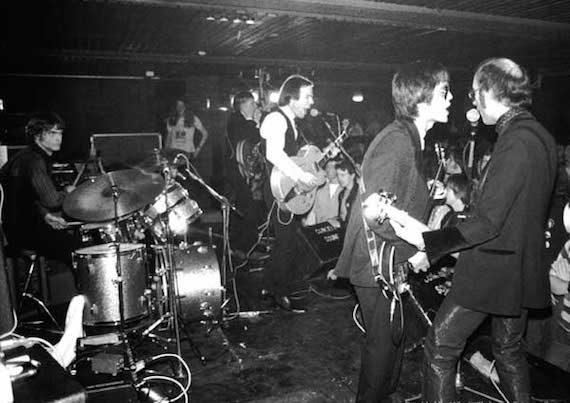 Dig it. In celebration of their 50th(!) Anniversary, San Francisco’s legendary Flamin’ Groovies have released their first tracks since 1992’s Rock Juice. And in a move that rings full circle, from a band that inspired numerous nascent punk rockers and power poppers, the record is being released via the guys carrying the torch at Burger Records.

The A-side finds “Crazy Macy” — a track deeply rooted in British Invasion sounds, with a  charming accompanying video channeling the vibe of a Hard Day’s Night. The echo-heavy production is straight out of the band’s magnum opus, the immortal 1976 lp Shake Some Action. 2nd Generation vocalist Chris Wilson (who replaced original vocalist Roy Loney in 1971), belts out a soulful lead in between the accompanying harmonies.

The flip side, the celebratory “Let Me Rock”, is even stronger. With a commanding intro that builds tension, Wilson’s raw vocal is front and center with a lyric demands that rock ‘n roll isn’t going anywhere. And for the six minutes that the platter is on the turntable, who’s to argue. The Groovies are presently touring all over Europe, where their fanbase is rabid. words / d see