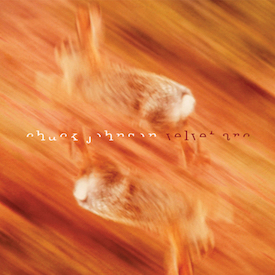 Bay Area guitarist extraordinaire Chuck Johnson’s recent (mostly) solo acoustic LPs have proven him to be one of the most reliable players on the new-Takoma School scene. His new album, the utterly fantastic Velvet Arc, shows that Johnson is just as masterful in a more fleshed out band setting. The album’s seven songs offer shimmering electric guitar blending with gorgeous pedal steel and folky fiddles fading into mesmerizing minimalist pulses, backed up by a sturdy rhythm section.

It’s a widescreen vision of Americana that fits in with what William Tyler has been up to for the past few years, but Velvet Arc delivers its own unique reveries. Even though the album is less skeletal than on his previous solo work, Johnson never lets his songs get too lush or soft focus; each moment feels perfectly devised, as the guitarist guides us through one absorbing soundscape after the next. An album that just gets deeper the more you spin it. words / t wilcox