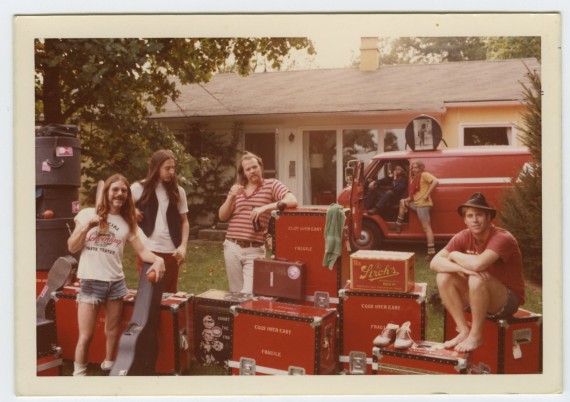 Drawing a line from the rootsy grooves of the Band to  the scuzz of late ’70s punk rock isn’t  the first move most musicologists would make, but a case could be made for exactly that via the lean, ambling music of Eggs Over Easy.  In the early ’70s,  New Yorkers  Jack O’Hara and Austin de Lone met and formed a duo in  Berkeley, California, before bouncing back to New York to solidify the band, which they called Eggs Over Easy.  Borrowing directly from the Band’s rustic swagger, the group eventually found its way to London, playing gigs  with the  likes Elvis Costello, Graham Parker, and  and Nick Lowe in the audiences, soaking up the American sound. To hear  Lowe  tell it, the band served as a unifying force in London pubs.

“There were hippies there, skinheads, Rastafarians,” Lowe says describing an early EOE show. “I remember, most especially, a Sikh bus driver with a turban on and his bus driver uniform dancing away. It was an unbelievable scene with people hanging off the ceilings. There was this fantastic feeling that you were in on something extraordinary.”

EOE helped kick start the  pub rock scene, which helped pave the way for punk, but make no mistake: the sounds featured on the  forthcoming Good  ‘N’ Cheap: The Eggs Over Easy Story, due June 24  via Yep Roc,  are purely roots, folding in country, rock & roll, and pastoral funk. The set features remastered sound and the entirety of the group’s recorded output, including its 1972 debut, produced by Link Wray (in his Three Track Shack prime), the band’s second album Fear of Frying  (oh, the puns) and previously unheard London sessions recorded by Animals bassist and Jimi Hendrix manager Chas Chandler. It’s excellent stuff, from the  booty swinging “The Factory” to the sublimely downcast “Arkansas.” File among Ernie Graham,  Goose Creek Symphony, Clover, and  Brinsley Schwarz (of which Nick Lowe was a member) as members of Aquarium Drunkard’s Band Not Band club. words / j woodbury