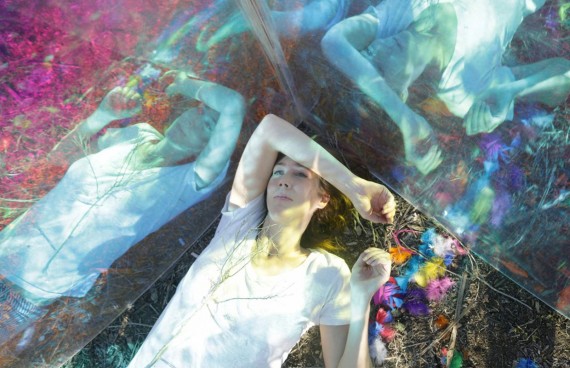 Beth Orton has spent 20-some years walking the margins between folk rock and electronic music. Before her 1996 classic Trailer Park, she recorded an entirely electronic debut, SuperpinkyMandy, but even then, she covered cosmic balladeer John Martyn’s “Don’t Want to Know About Evil.” In Orton’s hands, the lines between the genres have always been smudged — she’s collaborated with everyone from Terry Callier to William Orbit to Ben Watt — but with her new album, Kidsticks, Orton makes a decisive statement.

“…I would go as far as to say this resolutely is not a folk record,” Orton says via the phone from her home in Los Angeles, her accent making plain her English roots.

She has a point. Kidsticks has more in common with Stereolab or Four Tet than the gentle folk of 2006’s Jim O’Rourke-produced Comfort of Strangers or Sugaring Season, the album that followed it six years later. Built on loops engineered by Orton and Andrew Hung of Fuck Buttons, the new album is vivid and neon-colored. “Wave” rides a funky, shimmering pulse; “Flesh and Blood” bursts with interlocked melodies; “Petals” rises and falls with tremendous swells of synthesized bass. Orton’s hardly abandoned her lyrical focus. These songs, concerning the passage of time and exploring concepts of identity, feature some of her best lyrical work, not obscured, but enhanced, by the dense sounds that flutter around it. “There’s starlight burning in our hearts tonight,” Orton sings on the slow motion ballad “Dawnstar,” a line which encapsulates the vividness of her prose on the record.

Orton spoke with AD about building the album’s framework from rhythm loops, the influence of shuffle mode, and why this feels like the album she’s been waiting to make for a long time.

Aquarium Drunkard: You start off “Snow” singing, “I’ll astrally project myself into the life of someone else.” That’s one of my favorite metaphors for the act of releasing music. When you put out a record, that’s what you’re doing: releasing your voice and experiences into the lives of people listening. Where did that lyric come from?

AD: A shared illusion, at least.

Beth Orton: We sort of slip between time without really realizing it. We’re always traveling through time, our daily space is constantly between dreams. I play around with identity a lot on the record, and I just love the idea of astral projection. What the fuck does it actually mean, you know? Time travel – that’s definitely a theme of the record.

AD: Your records have always been rhythmic, but Kidsticks is specifically beat-driven. Did you start off with the beats first in this case, even before the lyrics?

Beth Orton: Certainly. I went into the studio with Andy Hung for ten days. I played keyboards, he would tweak the sound. We just [experimented] and these loops just came into being. We came out with about 20 of them. He went back to England, and I just lived with these loops. I just wrote and wrote and wrote, and songs came out, songs that wouldn’t necessarily match the loops, but at a certain point I pulled in live musicians. That’s where the meeting of the songs and loops came together.

AD: Had you worked in this fashion before? Did it change the way you wrote lyrics or put these songs together?

Beth Orton: No, I hadn’t. The fact that I was playing keyboards, not guitar, completely altered how I wrote. As you’re talking I’m thinking, “Fuck, how come it’s taken me this long to write this record?” Where have I been? I think I wanted to make this record many times. I wanted to make it around the time of Daybreaker, actually. I really wanted to go off and do something [like it].

I can’t help but go back and look over stuff. I’m someone who sings about not regretting anything and yet I’m someone who’s full of them, in my own way. The mistake I made around the time of Daybreaker is that I made a record I thought other people wanted me to make. I met the need of what I thought was required at the time. That led to other decisions being made and it’s taken me a really long time to free myself. After Daybreaker happened, I went into this thing of wanting to learn my craft, be good at what I do, then I had kids, this whole other life happened, and it was amazing. Then, I wrote a record that was an homage to that, Sugaring Season. That was wonderful.

But it’s been such a long journey, and now I’m here. It’s not to disparage anything I’ve done before, or to say [Kidsticks] is entirely different; there’s lots of connecting threads to what I’ve done before, but it is a breath of fresh air to have made this record. Someone just asked if I thought it was going to alienate people who liked my records before, and I don’t think it is at all. I think it might if it’s presented as, “Oh, she’s made this electronic record!” And people might be like, “Oh, fuck that.” I think the songs are influenced by the sounds, but I feel like it’s a broader depth of writing, which I’m really excited by and I hope other people are too. In the right way, like “I’ve created this, I hope you like it,” rather than, “You like that? Here, I’ve created something like that.” The songs, for me, are coming from a different place.

AD: Sonically and lyrically, they still feel like Beth Orton songs. I was about to say that it doesn’t feel quite like Neil Young making Trans, but I like Trans quite a bit. I don’t want to cite that as a bad example.

Beth Orton: But please don’t use it as a comparison, it’ll bum people out! [Laughs] I’m joking.

AD: You’ve mentioned a few times not playing guitar. There’s not much of it on the record at all.

Beth Orton: There’s some electric guitar, and one bit of acoustic guitar, but I don’t play it. I realized it the other day, as we’re getting ready to tour and I’m piecing through everything and putting it all together so that the band can learn it. I’m not playing acoustic guitar on this record, but having said that, it’s still a very warm record. I think it’s one of the warmest records I’ve ever made.

AD: Did you ever say, “I’m not going to play acoustic guitar on this record,” or did you start making the record and realize that not doing so would present a unique challenge?

Beth Orton: It was more like that, and also, someone said a brilliant thing — I’m stealing a journalist’s line here — but Brian Eno has those [Oblique Strategies] cards like, “Go into a room and do it there.” It was like that. “Move your entirely family to California, bring someone over from London who makes fucking mentalist music and make loops with him.” Everything was just a decision to try, with no expectation of it being anything in particular. As it went along, I realized, “Oh my god this is some of the most exciting music I’ve made.” I think there are some pretty soul heavy songs on there, if I do say so myself.

AD: Early on, you recorded a cover of John Martyn’s “Don’t Want to Know About Evil.” The genre name “folktronica” comes up a lot in regards to your work, and while I don’t like saying that term…

Beth Orton: Yeah, it’s revolting. Why is it so annoying? What is it about it? It just sounds silly.

AD: Yeah, it sounds awful, but nonetheless, Martyn blended electronic effects, layering, tape delay, in a way that created an electronic/folk hybrid. Was he an influence early on?

Beth Orton: Oh god yes. That was the first song I recorded, but I butchered it. I listen back and go, “Fucking hell.” I know I’ve acknowledged it in the past that he mixed folk and, to a degree, electronic sounds, but when I came to making those songs, I didn’t make a conscious connection to the fact that he was doing that. I made more of a connection to what Portishead or Massive Attack was doing. But you come to things with pre-conceived notions, so I’ve always thought of him as a folk singer. But of course, Martyn was a pioneer. He was extraordinary. He is extraordinary, because we still have his music.

AD: You mentioned coming to things with pre-conceived notions, and I think that’s interesting. Because a record like Kidsticks can be a folk record made with electronic instruments if you choose to hear it that way. There’s no dividing line, especially in 2016 where the need for music critics, fans, and musicians to put things in individual boxes doesn’t exist the way it used to. You made a mixtape for Apple Music, featuring Anderson .Paak, Erykah Badu, the Slits, Kanye, Van Morrison, and the Internet. It’s a great mix, and listening to it I was struck by how natural it feels to hear Roxy Music alongside Q-Tip. We don’t divide things up like we used to – does that reflect your own musical listening?

Beth Orton: For sure, but it always has. It used to be different, but now that’s the norm. Because of Spotify or shuffle, everything’s next to each other. In a way, we’ve kind of created this beast. It’s funny, yeah, everything’s on shuffle. Everything has a place alongside each other. I think it’s kind of brilliant.

AD: There are lots of negative aspects to streaming, and I certainly don’t like the idea of people not devoting the time to listening to one album, but overall there are so many interesting creative possibilities being opened up by access like that. A record like Kidsticks feels like the product of that ability to pull from disparate sources.

Beth Orton: Yeah, but I would go as far as to say this resolutely is not a folk record.

Beth Orton: I wouldn’t say “I’m mixing folk with [other elements].” I would say it’s more of a soul record. I feel like, for me, I just need to shake off this idea of being a folk singer for a while. Because I am and I’m not. I think when I made Trailer Park, it felt inauthentic to call myself a folk singer, which is why it was really important for me to work with people like [producer] Andrew Weatherall and William Orbit, to bring those elements into the record. Because that’s who I was, I wasn’t just someone who sat around playing guitar smoking roll-ups. I came from the real world and I would have seemed false to pretend otherwise. Then, I got on a journey of trying to learn, to try and emulate some of these classic songwriters, and now it’s like, “Fuck that.” I’m not emulating anyone, I’m just being myself. This is what happens when I’m being myself. It’s not that I haven’t been before – it’s not a black-and-white comparison – it’s just that, more than ever, I’m not trying to tie myself to being a “folk singer making electronic music.” That’s kind of gone. words/j woodbury

One thought on “Beth Orton :: The Aquarium Drunkard Interview”