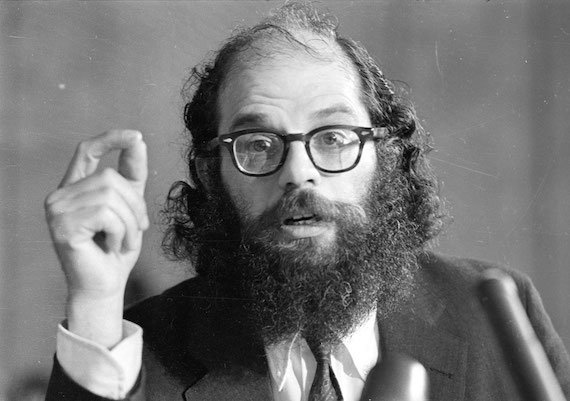 The poetry of Allen Ginsberg was a foundational influence  on the counter culture, informing folk, rock & roll, and punk, establishing a vocabulary that was as profane and fearless as it was beautiful and transcendent. But while his contributions to the  discographies of Bob Dylan and the Clash are well documented, his own musical explorations have been less publicized. With the recent release of Omnivore Recordings’ The Last Word on First Blues, a three-disc set featuring material recorded in 1971, 1976, and 1981, producer Pat Thomas has gone a long way toward illuminating this singing side of Ginsberg.

Featuring contributions from Dylan, avant-garde cellist Arthur Russell, an appearance by Don Cherry on kazoo, David Mansfield, Steven Taylor, Peter Orlovsky, and many more, the sessions presented here are wild, loose, and celebratory. The recordings  encompass far out country, gospel sweetness, jug band reveries, swinging jazz,  and blues, effectively presenting a template for future freak folk weirdness, playing in sandboxes similar to those of his friends the Fugs and Holy Modal Rounders. Certainly, Ginsberg’s voice takes some getting used to, but once you’re acclimated it’s easy to hear its versatility, capable of warm  softness on songs like “Gospel Nobel Truths” or free rapping on material like “Jimmy Berman (Gay Lib Rag).”

We reached out the Thomas to discuss assembling the collection, talking about Ginsberg’s voice, his role in Dylan’s Rolling Thunder Revue, and his assorted celebrations of pure freedom.

Aquarium Drunkard: In the notes, you talk about hearing about Ginsberg’s First Blues on MTV News, obviously released many years after the sessions were recorded. What was your first impression listening to the record?

Pat Thomas: I really was blown away, I immediately connected with it, in retrospect, surprisingly so — I didn’t need any “warm up” time to Ginsberg’s vocals or lyrics — and it quickly become something I played a lot! As much as any Beatles or Clash or whatever albums.

AD: After the initial 1971 sessions, there was talk of Apple Records releasing the material. Any insight as to why that didn’t happen? Seems like Allen’s stuff would have fit in well with Lennon and Yoko’s vibe, alongside people like David Peel.

Pat Thomas: I think mainly it didn’t get released on Apple because Apple was falling apart. The Beatles had of course broken up, they were fighting in with each other and with their “manager” Allen Klein. I mean, Lennon could have “pushed it out,” but didn’t for whatever reason. But yeah, it would have fit in nicely with the David Peel LP for sure… 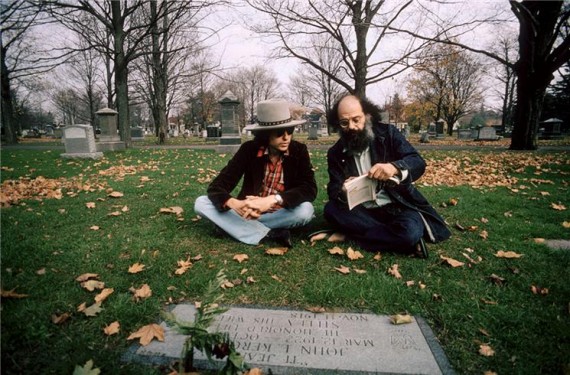 AD: While Dylan’s Rolling Thunder Revue was rolling along in 1976, Ginsberg and the crew found themselves back in the studio for more sessions. How about you describe Ginsberg’s role in that coterie? Grandpa? Guru? Guiding light?

Pat Thomas: Ginsberg (and Kerouac) were big influences on Dylan and others connected to the Rolling Thunder Revue. There’s a great photo of Ginsberg and Dylan “singing a song” at Kerouac’s grave during that tour! He was more guru than grandpa, me thinks, especially because Allen’s energy never felt “old”– he never felt “Grandpa-like.”

AD: Ginsberg’s influence on rock & roll is well documented. How about the inverse? What kind of music was he influenced by? The songs here range from weird rags and folky raps to blues to some rock numbers. Seems like he was game for anything.

Pat Thomas: Allen said when he heard the Beatles’ “I Want To Hold Your Hand” on the radio in 1964 that he “got it.” He knew right away that there was a cool, interesting change in the air with pop music, and let’s not forget “Beat”/”Beatles!” He also plugged into the Clash, right? He was smart enough to seek them out, hang out, and play with them.

AD: Obviously Ginsberg’s poetry could be profane, but I’m surprised that even among the vanguard of the counter culture, these songs took a long time to surface (a double LP, First Blues, was released in 1983). Was Ginsberg’s message simply that challenging?

Pat Thomas: I think the bigger problem was or is that nobody thought of Ginsberg as a “singer.” I mean, this box set is partly a repackage of earlier releases and only now in 2016 is anyone seemingly paying attention to this stuff. But at the same time, songs about “gay sex” aren’t gonna generally get airplay or love from the media.

AD: I’m surprised by the versatility of Ginsberg’s voice; on a song like “Gospel Nobel Truths,” he almost sounds like Kristofferson or something. What about Ginsberg’s voice appeals to you on a personal level?

Pat Thomas: His voice to me sounds warm and engaged and engaging, feels like an old friend or even family member singing to me. Weirdly, I find it comforting and inspiring. Marianne Faithfull heard this material years ago and told Allen to his face that he couldn’t sing. I thought, well, her voice isn’t exactly a traditionally great voice either!

AD: Though the “More Rags, Ballads, and Blues” disc features a lot of unreleased stuff, there’s lots more out there, right? Could you see more Ginsberg music collections in the future?

Pat Thomas: Yes, there is much more out there! Not so much of this folk-rock and blues material, there’s a bunch of Indian-Eastern music he did, some chanting, some other odds and ends. I could easily do a three-CD set of all unreleased material like that — or I could do a couple of “live” albums of the First Blues songs.

AD: I love the line, “We’ve abolished hell.” It speaks to the power of Ginsberg’s message, which you sum up beautifully when you say he simply couldn’t be embarrassed. His influence on punk came soon after — do you think that streak of fearlessness is his biggest musical contribution to that scene?