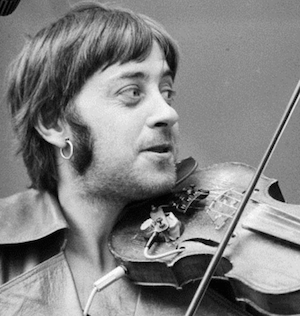 Extremely sad to wake up to the news of British folk legend Dave Swarbick’s passing at the age of 75. Swarbrick was the violinist on several Fairport Convention classics, played in a duo with Martin Carthy, made countless records on his own … and much more. The guy was a wizard, and could light up a room with his easy grin.

In a cruel twist, today sees the release of Live in Finland 1971 via Real Gone Music, capturing Swarb and Fairport blazing through an all-too-brief festival set of excellent Britfolk boogie. The raw, righteous recording features the band just after guitarist Richard Thompson exited. But even without their resident six-string genius, Fairport is a force to be reckoned with here, careening with thrash metal speed through some well-nigh unbelievable jigs, reels and traditional tunes, Swarb gleefully at the helm. Check out his fiery violin/guitar duels with Simon Nicol on “Matty Groves” and “Journeyman” for a blast of pure, raging glory.

For an incredible visual complement to this highly recommended set, dig in (for the first or hundredth time) this wild clip of the same Fairport lineup summoning the wild sprit of untamed Albion at the first Glastonbury Fayre. Farewell, Swarb, and thanks for the music. words / t wilcox