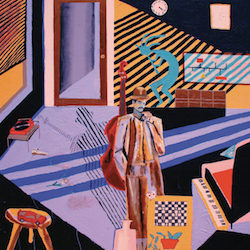 Mild High Club is the vehicle of LA-based Alex Brettin. His sophomore lp, Skiptracing, due out in August via Stones Throw, is landing at a perfect time. Occupying a hazy, humid space – not unlike the one Ariel Pink, Conspiracy of Owls and early Unknown Mortal Orchestra have previously helmed – Brettin’s cool, grooving blend of lo-fi psych, lounge, and exotica deftly sates that sweet seasonal Pacifica jones.

But it’s not all cocktails and swimming pools. 70’s noir oozes out of the grooves in a warped, almost alien, fashion. As influences, Brettin cites great fictional LA antiheroes such as Elliott Gould’s portrayal of Philip Marlowe in Robert Altman’s adaptation of The Long Goodbye and Jack Nicholson’s Jake Gittes in Chinatown, as well as more unsung yarns such as Night Moves and The Killing of a Chinese Bookie — and they feel right at home on this record. There’s a seductive, bossa-nova tenor shrouded in a thick cloud of enigma and smoke. Warped saxophones and back lounge piano. Percussive freakouts and looped tunnels of guitar and pedals. Who among us have not envied the unenviable position of Gould’s Marlowe? Like the album track “Chasing My Tail”, and the surreal retro futurist album art intimates — running in circles, lost in the mystery, but reveling in the haze. “It’s okay with me.” words / c depasquale