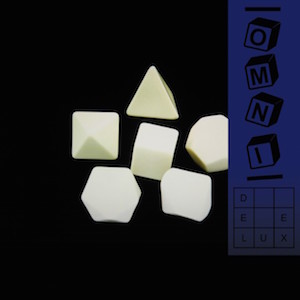 Four decades since the dawn of seminal post-punk bands Wire, Television, Pylon, Social Climbers, B-52s and Devo, that stripped down, raw minimalism remains a vastly rich mine – with no group currently striking more gold than Atlanta’s OMNI, via their debut lp, Deluxe. Made up of Carnivores’ Philip Frobos and Billy Mitchell, with Frankie Broyles of Deerhunter, we previously featured the trio’s lead single “Wire,” and now return for closer inspection.

On album opener “Afterlife” and the aforementioned “Wire,” OMNI light a fuse of angular melodies, pulsing guitars, and solemn vocals delivered through a conversational lens. On “Wire,” Frobos takes us on a whirlwind tour of love in fast-forward. “Lets share / champagne in the sand,” he sings, recalling a surreal and seductive fever dream. “White shirt / black dress / in the desert / Couldn’t tell you, I’m on hour / 24.” “Afterlife” takes on an odd, matter-of-fact perspective on death and what may come next — some kind of surreal Albert Brooks irony, only more ambiguous. “I’ve been a lot more steady / now that I know my death / I’ve been messing with what I wear / a formal look in death.”

Shrouded in reverb, “Jungle Jenny,” with its fetching hook, crashing cymbals and gothic theatrical aura, is infectious and triumphant; a song that feels vaguely forlorn and yet somehow invigorating. The track itself is a triumph – bearing a rich, deep well of sonic and literary gems. A modern-day paragon of the infinite possibilities, and rewards, of the post-punk form.   words / c depasquale

Related: The Lagniappe Sessions: Omni cover Alice Cooper and The Boys Next Door

One thought on “Omni :: Deluxe”