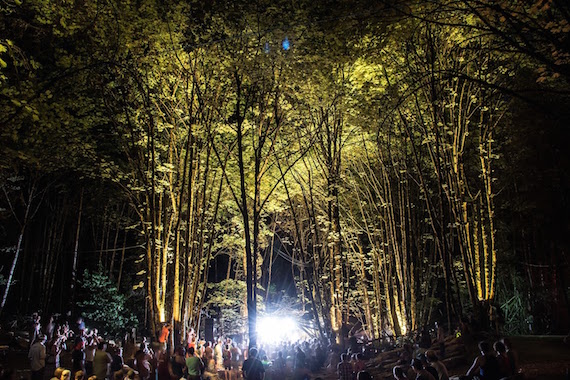 Just returned from Pickathon, the 18th annual “indie roots” celebration out in Happy Valley, Oregon. Held on Pendarvis Farm, this year’s happening was, once again, fantastic, maintaining the feel of a jovial party in the forest more than the clustered and claustrophobic feel common at most outdoor festivals.

In between hosting music/interview sessions in the Lucky Barn and DJing on the Woods stage, I caught some exceptional music. Highlights: Wilco songwriter Jeff Tweedy cracking Trump jokes (and jokes about his Trump jokes later in the woods), organist Cory Henry blending the B3 soul of Booker T. Jones with the force of prime Parliament/Funkadelic on the Woods stage, Mount Moriah’s fiery “Revolution Blues” cover, Sir Richard Bishop’s discussion of “non theoretical” guitar playing, My Bubba inviting the legendary Michael Hurley to the stage, the blackened hardcore of VHî–L on the Treeline stage, and fantastic sets by Open Mike Eagle, Ultimate Painting, Kevin Morby, Julia Holter, Protomartyr, Hurray for the Riff Raff, Mac Demarco, and dozens more.

The cornerstone of the festival’s appeal — aside from the gorgeous setting and the availability of Stumptown Coffee’s Duane Sorenson concoction — is its diversity, and the way that diversity isn’t made to feel scattershot or disparate. Whether hosting the feedback drenched drone pop of Yo La Tengo or the Afropop bliss of the “Minister of Enjoyment” himself King Sunny Adé, Pickathon maintains a curious and beautiful spirit. A little bit of that spirit is captured on wax by Easy Sound Recording co’s recent spate of Live From Pickathon releases. Following split releases by King Tuff/Ty Segall and Diarrhea Planet/Those Darlins, the label’s just dropped two new split 12″s: Woods and The Men, recorded in August 2014, and Vetiver and Wolf People, recorded in August 2015. Featuring art by Travis Bone of Furturtle, the records almost make me feel like I’m back on Pendarvis in the woods, something cold to drink in my hand. Almost. words / j woodbury